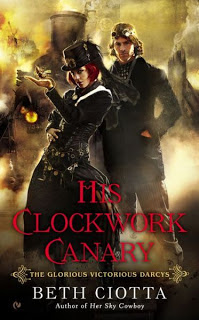 
History is repeating itself.

For ambitious engineer Simon Darcy, winning Queen Victoria’s competition to recover lost inventions of historical significance is a matter of pride—and redemption. After all, it was Simon’s failed monorail project that left his family destitute, and winning the tournament would surely restore the Darcys’ reputation.

Simon sets his sights high, targeting no less than the infamous time-travel device that forever changed the world by transporting scientists, engineers, and artists from the twentieth century. The Mod technology was banned and supposedly destroyed, but Simon is sure he can re-create it.

His daring plan draws the attention of Willie G., the Clockwork Canary, London’s sensationalist reporter. Simon soon discovers that Willie is a male guise for Wilhelmina Goodenough, the love of his youth, who left him jilted and bitter. He questions her motives even as he falls prey to her unique charm. As the attraction between the two reignites, Simon realizes that this vixen from his past has secrets that could be the key to his future…as long as he can put their history behind him.

All you have to do to enter to win each week is sign up using the entry form on the left sidebar.
Posted by Christina @ Biblio Thoughts at 12:51 PM