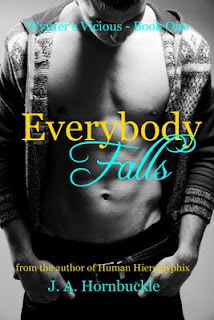 Summary: At 25, Jax Wynter lost his life.
As the youngest member of America's number one rock band, Wynter's Vicious, Jax lived a life with no rules or responsibilities. At least until his older brother, founding member and vocalist, died in a fiery car crash. Jobless, clueless and deemed unfit to handle his own affairs, Jax must sober up, man up and adjust to living as a 'normal person' in the 'real world'.

At 24, Lacey Emerson found hers.
Shuffled between her bi-polar mom and her former hippie grandmother, Lacey had no choice but to become responsible at a young age. Her chaotic childhood, though, gave her the skills and determination to succeed when she inherited her grandmother's bakery. Her life was finally normal, real but very, very boring.

All it took was a five-point face plant to turn both their lives upside down.

From the author of Pole Dance, Human Hieroglyphix I & II and Tap Dance, comes the new novel, "Everybody Falls", Book One of Wynter's Vicious Series. Set in the beautiful town of Auburn, California and filled with a cast of quirky characters, it’s a story about learning to live, learning to love and learning to hold on when your brand of 'normal' comes undone.

Sometimes you have to fall from grace before you can fall in love.

I absolutely LOVED Everybody Falls. I've really been getting into the who rocker things in books, and I fell for Jax right away. There's just something about Jax that you can't help but love, as Lacey finds out firsthand. There are some really heartbreaking moments that just broke my heart. I'm really looking forward to seeing where this series goes next.

He'd become such a fixture of the morning scenery, the sounds of his feet on the asphalt keeping time to
whatever was in his head. I had taken to putting on music that had a beat to match his cadence. Today, my MP3 in the store was playing Soundgarden's 'Black Days'.

The low volume of such a rock anthem was probably illegal in more than a few states.

In fact, the hard-driving rock anthems seemed to be my music of choice when I waited for him. There was
something about the set of his shoulders, the tattoos that fully covered his arms spoke to me of deep pain when I watched him run, but I couldn't have told you why.

Normally, he'd run right by me with only a quick wave, which was more than alright by me.

But, not by his own volition.

He tripped, wind-milling his way past me on the porch steps. Taking giant, wobbly steps trying to find his
balance before failing, before falling.

"Arrg," he shouted as his face had hit the ground.

I placed my new bright blue mug on the worn piece wooden step and made my way slowly to his still figure
sprawled on the blacktop. I could see his back rising and falling with his breaths, so I figured he was, at least, alive after his dive. That would've been a horrible epitaph, 'Death by Pavement'.

Either that or a great name for a band.

Even as a young girl, J.A. couldn't wait to read. In fact, her first real temper tantrum was at the end of first grade when she realized that unless the book or magazine included the words, "Dick", "Jane" or "Spot", she was still at a loss.

The thirst for the written word has never left her.

But after reading three crap books in a row on her Kindle (or Ken-doll, as she calls it) in July 2012, she decided she could do better. Armed with a few notes, she blithely wrote out the first draft of her first novel and found her first book was worse crap than the stories that had started the whole cycle. Taking the advice of another author, she studied and learned, re-wrote and re-edited. As of June 2013, she's published five books with another in progress.

J.A. has been fortunate to travel throughout the U.S. and overseas, though she's now calling the Phoenix, Arizona area home. Those travels, places and the people she's met help provide fuel for her books which is always why she includes the verbiage, 'Although, if you recognize yourself in any character represented …maybe we need to talk.' She calls it her rider to the disclaimer assuring readers that her characters are not based on any one particular person.

When asked to sum up what she wanted others to know about her, she simply says, "For those that have been with me on this life's journey…Thanks for the memories! And those that are still on their way…Where've you been? My heart's been waiting for you."