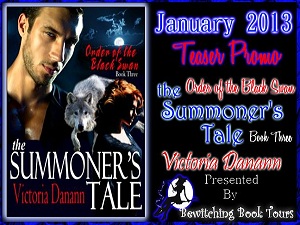 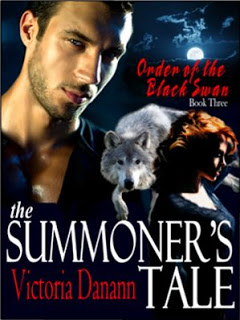 A secret society, a witch, a psychic, vampires, modern day knights, heroes, elves, fae, assassins from another dimension, and fairytales come together where emotions intersect. Two souls, joined by a mystical bond, separated by distance, must simultaneously struggle through pain and darkness in an ultimate confrontation with character and an ultimate struggle for life proving that true love waits patiently through lifetimes and finds courage to survive. Even in the strangest places. Even when you're least expecting it. Even when you're far, far from home.

CHECK OUT THE FIRST TWO BOOKS IN THE ORDER OF THE BLACK SWAN SERIES! 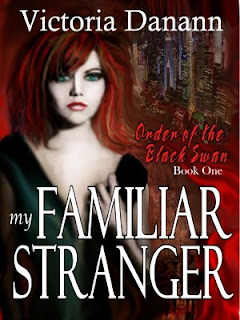 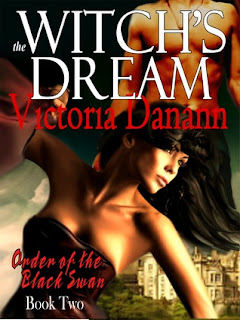 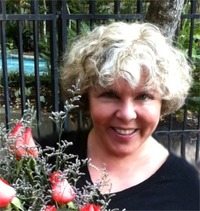 For the past fourteen years, Victoria has illustrated and authored Seasons of the Witch calendars and planners for 7th-House.com.

Though works of fiction are a departure for me, I have had this series simmering on the back burner of her mind for years. In addition to authoring and illustrating Seasons of the Witch, I play rock music and manage one of Houston's premier R&B/Variety/Pop bands.

This series will include some of my actual experience in the paranormal with fictionalized anecdotes from my journals during the years when I was a practicing "metaphysician", but most of the material is fantasy.

The Art of the Review by Victoria Danann

There was a time when the purview of book reviewing was limited to a very small and exclusive club of literary critics who wrote for newspapers or magazines.Those highly prized jobs were few and far between and were bestowed upon only the most qualified journalists who had passed a series of tests. The first rung of the ladder required a degree in journalism and, often, a double major in English as well. The second step was years of dues-paying tasks that were much less glamorous and desirable. If a candidate survived the business until a spot opened up, they might be offered a probation period with permanent assignment dependent upon satisfactory performance.

The book review revolution coat tailed so closely with the rise of Amazon.com as to virtually coincide. The first wave came in the form of Amazon customer reviews. For the first time, any individual was able to publish their personal opinion anonymously without vetting of any kind.

Although Amazon publishes "General Review Creation Guidelines", I doubt that many have read them. The bulk of the remarks dedicated to guidelines deals with "what's not allowed". What I would like to quote here is the section on tips. Keep in mind that this section is not exclusive to book reviews, but includes products as well.

Include the "why": The best reviews include not only whether you liked or disliked a product, but also why. Feel free to talk about related products and how this item compares to them.
Be specific: Your review should focus on specific features of the product and your experience with it. For video reviews, we recommend that you write a brief introduction.
Not too short, not too long: Written reviews must be at least 20 words and are limited to 5,000 words. The ideal length is 75 to 500 words. Video reviews have a 10-minute limit, but we recommend 2 to 5 minutes to keep your audience engaged.
Be sincere: We welcome your honest opinion about the product--positive or negative. We do not remove reviews because they are critical. We believe all helpful information can inform our customers’ buying decisions.
Full disclosure: If you received a free product in exchange for your review, please clearly and conspicuously disclose that that you received the product free of charge.

The Rise of the Blog
"Like cream, the best critics rise to the top in terms of readership/followers/subscribers."


The second wave of upheaval can also be attributed to the innovation of Amazon.com. The explosion of self-publishing created a coexisting demand for self-marketing which created a demand for more book reviewers.

Should blog reviews carry more weight than customer reviews? The answer to that question is definitely yes. Sometimes. Anyone can put up a blog within minutes and call themselves a book reviewer. Some of the larger sites attract reviewers with the lure of free books and require absolutely nothing from them other than a name, email, and, perhaps, what genre they would like to review. In the case of a blog, there is no newspaper or magazine editor vetting the reviewer for you, you are left to your own devices to discriminate. The good news is that seems to be working in many cases. Like cream, the best critics rise to the top in terms of readership/followers/subscribers.

The good thing about Amazon.com customer reviews is that, again, while individual reviews may not be worthwhile, numbers usually prove true. I can look at the number of total reviews (regardless of rating) then look at the publication date and predict whether or not it's a good book. If a book has been out for six years and has two reviews, it's probably not going to be memorable in a good way. On the other hand, if a book has been out for a year and has a lot of reviews relative to other books within the genre, it means that many people were moved by that book to take the extra step of returning to the purchase page to register their opinion. Again, cream rising to the top.

An Author's Review of the Reviews System

Speaking as myself, for myself. Many would say I'm going where angels fear to tread, but, hey, I'm no angel.

1.) My biggest complaint hinges around the question of summarizing which often includes SPOILING!! There's a reason they call these plot giveaways "spoilers". I may spend months perfecting a turn in the story that could potentially give a reader a surprise jolt of pleasure. You, as a reviewer, can ruin that in two sentences and thirty seconds. Please believe me, if given the choice, I would much rather you trench my lawn or egg my house. You may think you're providing a service to other readers by revealing the plot twists or outcomes, but you're not. To other readers, it's simply selfish, thoughtless, and inconsiderate. To the author, it's disregard and disrespect.

A review isn't a middle school book report. A good review isn't a summary to prove you "really" read the book. If the book should be publicly summarized, I assure you the author of that book could do a better job than you. There's a really good reason why they didn't.

2.) ANONYMITY IS THE ENEMY OF CIVILITY.

People do say things in reviews that they would not dream of saying to someone in person. They also say things they wouldn't say if they knew their name was going to be on it - their real name. What's wrong with that? Well, hiding behind anonymity brings out mean spiritedness in some people.

In the days when the only published critics were legitimate literary critics, their names (real names) were proudly displayed on their columns. They took responsibility for what they wrote and knew that they might be out to dinner one night in New York and run into the person whose work they reviewed. That didn't mean that all reviews were good. It just meant that there was a measure of accountability.

Authors are all too aware of the fact that our worst reviews are often written by other authors who establish "sock puppet" accounts for the solitary purpose of bringing down a book's rating.

One last thing regarding my host. Night Owl Reviews, as a collective, has mastered the art of the review in the sense that the reviews are well thought out, informative, and entertaining without crossing the line of giving away the point of reading the book. NOR is part of the new elite of literary critics - bloggers who can be relied upon to review for the benefit of readers.

On my own blog I have listed some of these and Night Owl Reviews is among them.

My first book of the serial The Order of the Black Swan, My Familiar Stranger, has just topped the milestone of 100 FIVE STAR reviews. It is available for FREE download from Amazon, B&N, iTunes, Smashwords, KOBO, and Diesel. The second book, The Witch's Dream, is available exclusively at Amazon. The third book, The Summoner's Tale, will release Valentine's Day on Amazon along with a three book collection edition that will release everywhere in electronic form.
Posted by Christina @ Biblio Thoughts at 12:00 AM