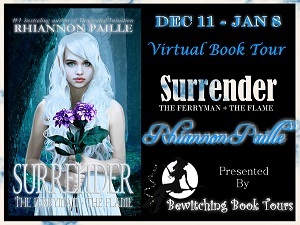 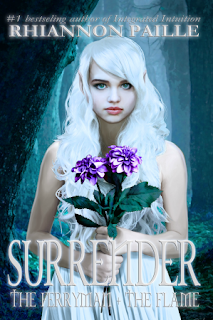 SURRENDER
The Ferryman and The Flame Book 1
Rhiannon Paille

How far would you go to save everything you ever loved?

Kaliel was warned about her love for the Ferryman. One day he will marry the land and leave Avristar forever. She doesn't listen, and because of what she is-- a Flame-- one of nine apocalyptic weapons, she sparks a war. In a desperate attempt to save her home and her love, Kaliel tries to awaken Avred, not knowing she may have to make the ultimate sacrifice.

“Sorry I scared you,” he said.
Kaliel pressed her lips to her knees, hoping she could hold in her emotions. “I’m not afraid of you.”
Silence hung between them for awhile. He shifted on the cloak, the black tunic he wore shifting with him. He stretched his legs out, and Kaliel looked at his shin-high boots and breeches. He stole a glance at her turtle shell. “What are you afraid of?”
Kaliel stood. “Happy endings.” She didn’t know how else to explain it. She had contemplated the parable so many times it was exhausting. It didn’t matter which path she took—neither of them seemed very appealing. She let the mist soak her sleeves and stick to her skin. She heard Krishani behind her before he ran his hand down her back making shivers run up her spine. He stayed there, a foot away, and she wished he would move closer, envelope her in his arms. He wasn’t supposed to talk to her. This had to be wrong. What would the brotherhood think?
“Happy endings?” he whispered. He sounded both unsure and nervous. “What do you mean?”
“What if someone comes?” She was worried Lord Istar would burst through the trees and find them in this compromising awkwardness. It seemed more taboo than practically drowning in the lake.
Krishani let out a breath. “Nobody ever comes here.”
Kaliel closed her eyes. “You come here.”
Krishani took a step forward and she could feel the heat radiating off him. “All the time.”
She didn’t answer, instead listening to the sound of the falls. Moonlight glinted off the flecks of water. She thought about the orb of ice he created for her. She hadn’t been able to do anything close to that awesome.
“What are you thinking?” he asked again.
She closed her eyes and felt her energy shift; like it had the day she went to the Great Oak. Heat rushed through her as she leaned back, trying to feel him, but not trying to force it if it wasn’t what he wanted. It was clear to her he cared, but she was so worried about whether or not she should let him.
“My parable,” she whispered.
He went rigid, his hand sliding down her upper forearm. “What did the Oak say to you?”
She shook her head. “Never mind, I have to figure it out. Both paths seem so dreary.”
“You seem too sweet to have a bad parable.”

She didn’t want to talk about the nightmares of the Flames, the parable, the fact the Brotherhood would disapprove of him touching her. It felt so natural; the last few moons had been lonely without him. She couldn’t explain what she felt, but she couldn’t watch him marry the land and leave the island.
“But I do,” she said. She drew her hands instinctively to her chest, her elbows digging into her ribs. He dropped his hand as she turned, and buried her face in his chest. He reluctantly ran his hands through her hair, letting them rest on the small of her back.
“I thought about you every day,” he said as she pressed her cheek into his tunic.
She smiled against his shirt. “And I thought about you.”
“Promise me something?” He wasn’t holding her, not really, their bodies weren’t pressed together and the inches between them made Kaliel feel cold.
“What?”
“You’ll find a happy ending.”
“What if I can’t?”
He pulled back and brushed his thumb across her cheek. “Promise me you will.” His eyes met hers and his jaw dropped. His hand paused, cupping her face in his palm. He held her gaze, her heart beating hard. Before she had time to answer, he pressed his lips against hers. She didn’t expect him to do that and it was better than she imagined. She came to life under him, kissing him back with unyielding passion that made him pull away to seemingly catch his breath.
Kaliel’s sadness drained away as he broke from her lips and then cupped her face with both hands and kissed her again, pressing the length of his body against her. His kisses made her feel light and giddy, like she could float into the sky. She slid her hands up his chest and looped them around his neck. There was swimming in the lake and losing her breath and then there was this. Being out of breath with him was like drowning in a sea of happiness. He could keep her prisoner forever and she’d never complain. He pulled away again, and wound his arms around her waist, trapping her against him. His lips found hers again, rough and inexperienced, but strong and satisfying.

She opened her mouth and his tongue grazed hers, warmth spreading from her heart to the rest of her body, making her tingle. She smiled against his lips.

“I missed you.” She tried to steady her breathing.

Krishani shook his head and put his hands on either side of her face. “This is all I want. This and nothing else, ever.” His mouth covered hers again. He pressed himself against her and she sighed. It felt like she had known him her entire life and even longer, if longer even existed.

Images appeared behind her eyelids—the shape of a boy and a girl wearing gaudy crowns on their heads. They were painted into parchment, but they were blurry. She was too elated by Krishani and his lips on hers to record the images, but they seemed familiar.

And then everything changed. Krishani pushed his lips against hers one last time and she felt the shift in her energy dissipate. It was as though all the joy evaporated, replaced by intense fear. She pushed him away and tried to understand the pounding in her heart that made her want to break in half.

Bloom the weed of temptation.

He looked confused and shocked. Without a word, she turned and fled towards the Elmare Castle. 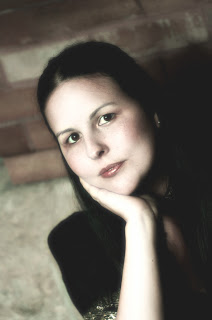 Rhi was never a normal girl. Her life was an urban fantasy wrapped in a paranormal romance and served with a side of horror. To escape her everyday weirdness she began writing fantasy. She studied at U of Sedona and MIMT, obtaining a PhD in Metaphysical Science and Parapsychology. She’s married to a chef/comic book shop owner and she has a fondness for architecture. She frequents twitter and facebook, but if you really want to get to know her you should visit her site: www.yafantasyauthor.com

Where do authors get their sexspiration?

When it comes to my writing, I take my inspiration from real life experiences. I write YA so I'm more or less looking for hot without sex kinds of memories. And not the I-kissed-that-boy-and-didn't-like-it kinds of situations either. I mean those times when there were butterflies in the stomach, dry mouth, nerves, inability to walk straight and clammy palms. I'm talking about those emotions that force a surge of tingles and warmth through your body. The kinds of feelings that make it hard to think about anything but how good it feels to have his lips on yours.

Needless to say, I've only had a couple of boyfriends who made the cut and become inspiration for fiction. There's a fine line between sexy and really not sexy. In fact, it can become creepy, disgusting, embarrassing, or scary depending on your thresholds for pain and pleasure.

And because I know there are only adults in the room, here's a sexy scene from JUSTICE, the second book in The Ferryman + The Flame Series.

“We need to be quieter. Melianna sometimes checks on me at night,” she whispered.
Krishani stifled his disappointment and pushed himself up so he could stare into her eyes. “It’s so hard not to want you.”

She pressed her lips together and sighed. He knew she felt the same waves of emotions coursing through her, but she let out a deep breath. “I want you, too.” Krishani went to kiss her but she sat up and put a hand on his chest making him lie flat. Nervousness washed over him as she idly moved her hands to the hem of his tunic.

He eyed her carefully as she pushed it up and he obliged, sitting up so she could pull it over his head. She shifted so she was on top of him, her pelvis digging into his. He eased into the bed, uncertainty flitting through him. He tried to stave off his desire but she leaned forward, placing light kisses on his chest and he gripped her upper arms, a question on his lips.

“What are you doing?”

She shot him a teasing, seductive expression and tingles ran down his thighs. “Do you like what I’m doing?”

She didn’t wait for an answer as her lips moved south, claiming his clenched stomach muscles, and the hair on his navel. Her hands found his hips and the hem of his breeches and he let out a gasping breath, unable to control himself. “Yes,” he said, his voice ragged. Whatever she wanted to do to him he was powerless against her. She glanced at him, a daring look in her eyes and slipped a hand into his pants, gripping him hard. Krishani couldn’t think, the sensation overwhelming, he arced his back, rocking his hips as she moved her hand back and forth against him.

“Where can I kiss you?” She asked, her eyes on his.

Krishani faltered, trying to find words. He stared at the grooves in the ceiling, pure exhilaration ricocheting through his body. He fought for control as she pressed her hand tighter and then something warm, wet and soft closed over him and he tensed, unable to hold it in.

“You have to stop,” he rasped, his hands finding her shoulders. She looked up, the pressure coming off him and he relaxed.

He smiled and pulled her towards him, kissing her long and deep, his tongue caressing hers. She settled next to him her hand on his stomach. “I like it too much.” Kaliel laughed. He kissed her lightly on the lips and held her more tightly to him. “One day when this is all over, I will marry you and not the land.”

She mumbled something in response as she ran her hands along the protective arm he draped around her torso.
Posted by Christina @ Biblio Thoughts at 12:00 AM