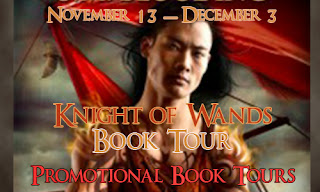 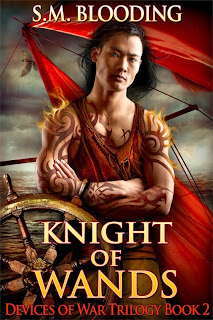 Tagline: Return to a world of mind blowing visuals, heart stopping action, and ships that sail the skies.

Summary: Nix, Queen of Wands, has exactly what she wants—Synn El’Asim, the greatest Mark the world has ever seen. Even though she bound his soul to hers, he is not easily controlled. If she wants him, she must do the one thing that pains her most. Let him go, and give him what he desires. Peace.

Armed with a treaty bearing Nix’s seal, Synn sets off to bridge the gap between the world’s two reigning tyrants—the Hands of Tarot and the Great Families. He struggles to trust Nix as he fights for control of his soul. He’s going to need every ounce of restraint when dealing with his mother, leader of the Great Families. She will not give up her power without a fight. Nix will honor her treaty only if Synn agrees to become her knight. His mother refuses to sign the peace agreement if he falls into the queen’s control.

Frustrated, Synn does the one thing neither woman saw coming. He invites all the tribes, currently voiceless in the war between these two ruling tyrants, to partake in the treaty negotiations. All they have to do is prove their worth in his Peace Games. As Synn’s influence and subsequent power grows, a new fight begins.

Who will control Synn’s League of Cities? Can he protect more people as a leader of the Great Families, or as the Knight of Wands?

This book is just as exciting as the first book, but focuses more on the political side of things. The characters are so interesting and complex, it's just really fun to learn more about them. And the world of this series is just extraordinary. I can't wait to see what happens in the next and final book. 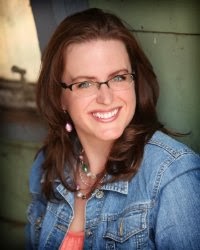 SM “Frankie” Blooding lives in Colorado with her pet rock, Rockie, and Jack the Bird. Jack has refused to let her to take up the piano again, but is warming to the guitar. It might help that Frankie has learned more than two strings. She’s added a few more Arabic words to her vocabulary, but don’t invite her into conversation yet—unless, of course, you’re willing to have a very . . . slow . . . conversation.

Follow the Book Tour!
Posted by Christina @ Biblio Thoughts at 12:01 AM