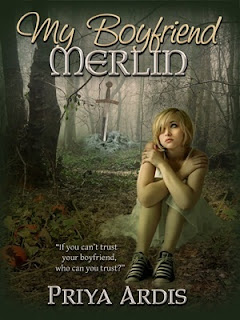 Tagline(s): If you can't trust your boyfriend, who can you trust? / He was a little older than he was letting on. By a few eons...

Summary: In this modern day Arthurian, 17 year-old Boston high schooler Arriane, aka Ryan, DuLac just found out the guy she's been crushing on, hot biker Matt, is a little older than he was letting on. In fact, he is really Merlin—the Merlin, King Arthur's Merlin, the greatest wizard who ever lived. Frozen in a cave for over fifteen hundred years, he's woken for a purpose. But Ryan's not impressed. Tired of being a relationship loser, she'd rather kick his legendary behind.

Sure, the world has been crazy ever since the sword and the stone fell out of the sky like a meteor. But despite gruesome gargoyles, a deadly new world of magic, and the guy driving her crazy, Ryan knows that family is everything. Will Merlin sacrifice hers to save the world? Will she be able to stop him?

Ryan DuLac had had a crush on Matt Emrys since she first saw him, but for reasons she doesn't understand, Matt broke it off before anything could get started. This makes things awkward between them, because even though Matt doesn't seem to care about her anymore, Ryan still has feelings for him. She just wants him to leave her alone, and it doesn't help when Matt is sending her mixed signals.

There are two things that complicate matters. The first is the sword in the stone and the fact that Matt is really the most powerful wizard in history, the famous Merlin. The second is Vane, Matt's brother. Vane has a past with Ryan that she didn't even remember until the Candidate test.

This love triangle really kept my attention. I would normally root for Matt in this case, but his hot-and-cold act really annoyed me. Although Vane seems like a bad boy through-and-through, like most bad boys Vane is pretty good on the inside, but still shelfish. He just doesn't show that side of himself that often. So I grew to really like Vane and I was rooting for him in the end.

Another great thing about My Boyfriend Merlin is the action. The action starts pretty early in the story with the Gargoyle attack. From deadly car chases to kidnapping and murder attempts, the action is non-stop. This keeps the story exciting and the romance keeps us swooning.

I am a HUGE fan of anything Arthurian, so I was really excited to check out this series. And I wasn't disappointed. There's love, hate, betrayal, sacrifice, and hope. Everything an Arthurian tale should have. In my opinion, Priya Ardis wrote an amazing story worthy of being in the Arthurian saga. This new modern take on a beloved classic is a story fans of the Arthurian legends shouldn't miss.

Priya Ardis loves books of all kinds—but especially the gooey ones that make your nose leak and let your latte go cold. She started her first book at sixteen, writing in notebooks on long train rides during a hot summer vacation in India. Her favorite Arthurian piece is the poem The Lady of Shalott by Lord Alfred Tennyson. A hopeless romantic, she's a longtime member of the Romance Writer's of America. When not living in her characters' world, she might be found at the local coffee shop—her nose buried in a book.