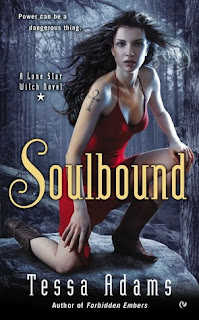 
As the seventh daughter of a seventh daughter—and a member of Ipswitch’s Royal family—Xandra Morgan should be a witch of incredible power. But things don’t always turn out like you expect…

While she hasn’t lived up to her family’s expectations, Xandra has come to terms with her latent magic and made a life for herself in Austin, Texas, running a coffee shop where she makes potions of a non-magical nature. While things aren’t perfect, Xandra is happy—until she runs into powerful warlock Declan Chumomisto.

Xandra hasn’t seen Declan in years, and though she’s still overwhelmed by his power, she doesn’t trust him. And when her own powers awaken one night and lead her to the body of a woman in the woods bearing the symbol of Isis—the same one that has marked Xandra since the day she met Declan—she’s filled with a terrible suspicion, soon confirmed: the woman is connected to him.

Xandra doesn’t want to believe that Declan is capable of murder, but as the body count mounts, and Xandra’s own powers spiral out of control, she’s not sure she can trust her own instincts…