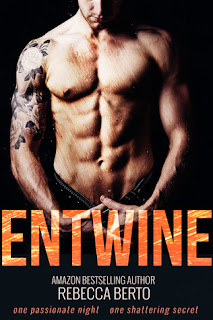 Sarah Langham’s life was the epitome of normal until her dad slept with another woman when she was sixteen. It ripped her family apart.

Twenty-two-year-old Sarah has it together, though.

Waiting at the train station to go home from her first day of her first proper job out of university, she spots a man.

He is an enigma to her. She’s drawn to him, with his square jaw; buzz of hair; and his tall, solid frame, seen under the contours of his business suit. And he’s been looking at her, too. Fate pulls them together that night on a whirlwind date, exceeding anything Sarah’s experienced before. He’s even more into her than she’s into him. Finally, she wants to trust a guy for the first time since she was sixteen.

But then they discover something.

Something that meant they were never two strangers at a train station.

And it threatens to tear their future apart before it, really, ever begins.

When Sarah first came home her ears had a faint ring in them, and now, in the aching silence, they buzzed at her fiercely. Her first thought was Ah! Relative quiet for once. I’ll just sneak in and get my mobile phone. Now she wished her dad had been doing anything else, even playing that stupid rock ‘n’ roll music. She had a solution for that: plug in her Favourites playlist and turn the volume up.

She heard the first moan, whispering through the walls. She was drawn toward the sound in her parents’ bedroom; it was like the undeniable dread of watching someone being bullied from afar. It was being unsure how to make it stop.

But Sarah’s mum was out, and there was definitely two people making those sounds in there. For the first few moments, Sarah wondered if her mum had suddenly materialised here. Why else would her dad be moaning in sync with that female voice, and the bed legs be screeching in that way?

She remembered arriving into the silence that had encased her, replacing the throbbing sounds from the party she’d just been at, thinking it all seemed too quiet in here.

Sarah felt the blood drain from her face. A sense of nothingness washed over her as she braced her palm to the wall outside her parents’ bedroom, narrowly preventing her wobbly legs from taking her down.

What should she do?

She willed her ears to block out what she heard, but she knew sticking her fingers in the holes wouldn’t help a bit. And her dad didn’t deserve to be the reason she harmed herself if she poked inside too hard.

Sarah wished she could run, but instead her feet stayed rooted against the wall, and she shivered at the choice she had to make. What would she do, tell her mum that she could hear the bed creaking against the frame, that her dad’s friend wasn’t trying to be quiet at all?

The sounds triggered a memory. She’d caught a weird text message when sitting at the kitchen bench, her playing with her dad’s phone, her mum still at work. Her dad had snapped his mobile phone from her fingers and told her to go to her room. Her shock back then debilitated her choice to tell her mum. Her voice didn’t work when she tried to speak, and her throat was tight even when she swallowed. Now, hearing what was happening behind the wall, she had no idea where to even begin.

Sarah clamped a hand over her mouth in case she sobbed loudly, forced her other hand to push her from the lure of the wall where she had been frozen, and to walk herself out the front door.

Back to that party. Back through the shadows of darkness and odd orbs of light, along the sidewalk, back to the noise and the alcohol, and the people trying to forget their responsibilities. 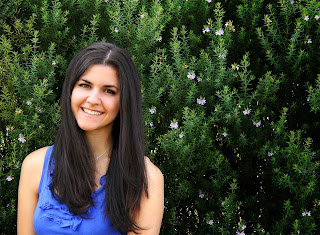 Rebecca Berto writes stories about love and relationships. She gets a thrill when her readers are emotional reading her books, and gets even more of a kick when they tell her so. She's strangely imaginative, spends too much time on her computer, and is certifiably crazy when she works on her fiction.

Rebecca Berto lives in Melbourne, Australia with her boyfriend and their doggy.

ENTWINE is launching at $0.99 for a LIMITED TIME! 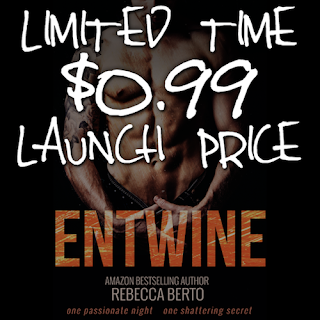