#FEARTHEREAPER: Countdown to Wings of the Wicked Week 1 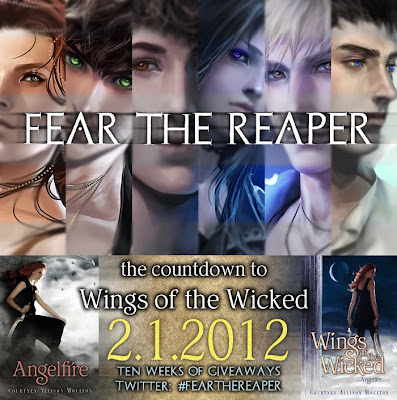 This time we are counting down the release of WINGS OF WICKED!
The first chapter of Wings will be in the ANGELFIRE paperback out January 17 along with an exclusive scene from Will's POV involving, Ragnuk, Bastian, Ivar, Geir, and Cadan.....
So much excitement!
In the Fear the Reaper tradition, Courtney will be giving away a book and posting a song from the WINGS OF THE WICKED playlist each week, but because some of these songs are massively spoilery, she'll let the lyrics speak for themselves and she will say nothing about what the song means in relation to Wings. These songs will be posted chronologically with their scenes in the book You will have to find out for yourself!
Be sure to check out the Wings of the Wicked soundtrack
to hear songs for the book that she wrote herself!
CD's will be handed out on the Dark Days of Supernatural Tour in February!
Week 1
Song: Faster by Within Temptation

CLICK HERE: So head over to Courtney's blog to enter the contest for a SIGNED ARC of WOTW and listen to the first song! 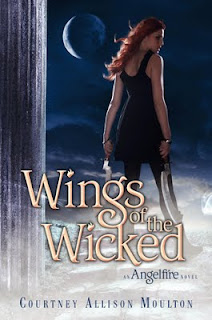 Be one of the first to read
Wings of the Wicked!!
Posted by Christina @ Biblio Thoughts at 11:47 AM