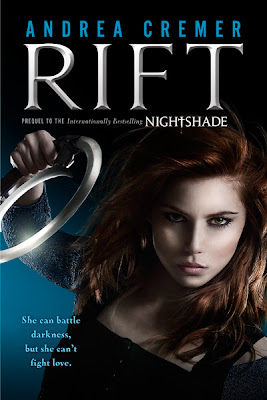 Hollywood Crush has the EXCLUSIVE cover reveal for this exciting origin story about the Knights of Conatus and a never-before-seen look at its feisty heroine, Ember.

Clearly, the lack of wolf-human shapeshifting in this book is in no way indicative of a lack of fierceness on the part of its main character; just check out that ice-cold glare.

"While the 'Nightshade' trilogy is set in the present day, Calla and her pack are fighting on the front lines of a war between two powerful factions of witches that has been waged for centuries. I always knew that a complex, compelling tale of love and betrayal lay at the heart of the Witches' War and I'm thrilled to be able to share the tale."

And for those who had been following the story of Calla and her pack from "Nightshade" to "Wolfsbane," Andrea promised that "Rift" will reward their fluency with some connections that only a true fan can make: "I can't wait for readers to discover the ties between 'Nightshade''s present and the distant past. 'Rift' reveals how the Searchers and Keepers came into being and how the gateway between the earth and the nether was first opened. Readers who paid close attention to the history revealed in 'Wolfsbane' will recognize quite a few names and events."

Meanwhile, Andrea is just as excited as we are to see the "Rift" cover in all its polished glory. She says that the image is the essence of Ember, the tenacious teenager who joins the Knights in order to repay her father's debt. And if you're wondering about that scary-looking blade in her hand?

"Ember wields a pair of circular blades that are a variation of ancient Chinese weapons called wind and fire wheels," Andrea explained. "Since her weapons are unique we talked a lot to make sure the style and proportions were correct."

As in, that thing is real. And terrifying! But in the hands of the feisty heroine of "Rift," we can't wait to see it do some serious damage.

What do you think of the exclusive first look at the "Rift" cover image?
Posted by Christina @ Biblio Thoughts at 3:14 PM