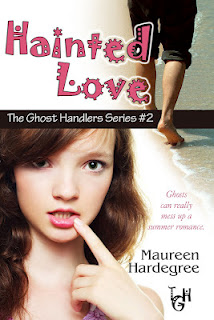 
What's a girl to do when her first-ever summer romance turns out to be . . . a little ghostly?

For Heather Tildy, life doesn't get much better than watching cute boys ride skimboards during her family's summer vacation at the Georgia shore. Yes, she still has her problems: she's a hypersensitive "ghost handler," a soon-to-be ninth grader with a bullying older sister, and the number-one lovesick fan of gorgeous lifeguard Drew Blanton. But she's living in a ghost-free zone for the moment, and that's great.

Until she wakes up with a handsome teen ghost in her bed.

Jack thinks he's still alive, so he's convinced he's the one who's found her in his bed. He drowned while he and his family were living at this very rented beach house, sleeping in the same room that Heather now occupies.

So much for a fun time at the beach.

Heather is now in charge of this cute, stubborn ghost-guy who doesn't believe that only Heather and her ghost-psychic Aunt Geneva can see and hear him. Just like the last time she got stuck with a wayward ghost, Heather has to dodge trouble and play detective. Jack needs proof that he's dead. How can she find the evidence he needs in order to move along with his life, er, death?

And will she ever forget his oh-so-real kiss?

All you have to do to enter to win each week is sign up using the entry form on the left sidebar. Winners are chosen at random and posted on the site every Friday morning. Hence the name, "Free Book Friday!"
Posted by Christina @ Biblio Thoughts at 2:50 PM