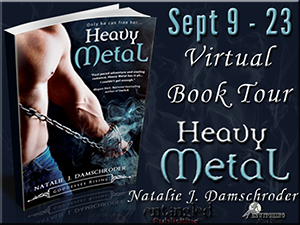 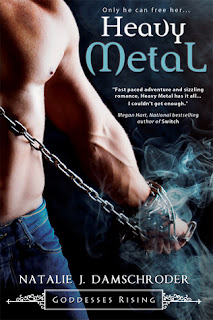 The world is not what Riley Kordek imagined. On the run from those who’ve targeted her, all Riley wants is a chance to figure out her new ability to bend metal’s energy. When a hot guy who knows more than he should helps her escape her attackers, she thinks she might’ve found someone who can lead her to the answers she needs.

Three years ago, Sam Remington walked away from his employer and the woman he loved, and now, all he’s looking to do is fill the gaping hole left behind. Except, when Sam takes Riley to the Society for Goddess Education and Defense, the stakes rise beyond what either of them could have imagined.

After being alone for so long, falling for Sam would be far too easy—and far too painful, once his old flame calls needing his help. Worse, Riley uncovers a plot with disastrous ramifications not only for herself, but for Sam and the people he loves—and potentially every goddess in the country.

CHAPTER ONE- HEAVY METAL
“The Society for Goddess Education and Defense is your go-to resource for learning about your heritage,
preparing for the onset of your abilities, and building supportive relationships with your fellow goddesses.”
—Sam Remington, promotional video, Society website

Riley’s sneakers crunched on gravel as she crossed the pitted lot in front of the squat, rundown bar just off a quiet road in Bridgeport, Connecticut. There was no sign over the door to tell her she was in the right place. Even if she was, her information wasn’t necessarily reliable. But she’d reached her limit even before her car had been stolen, and now all she wanted was a moment to sit down and decide her next move. What it was would depend on who stood behind the bar when she went inside.

The door creaked when she pushed it open and thudded solidly behind her after she stepped through. She shoved her hands in the pockets of her denim jacket and glanced around. The room was dim, hazy even though smoking had been banned in bars and restaurants years ago. The tables and chairs were mismatched, some wood, some metal frames and vinyl seats, even a few molded plastic. Most were empty at this late hour. Riley had wanted to be here earlier, when it would be more crowded and she could linger unobserved, but the car thing had made that impossible.

She made her way past a couple leaning close over a two-top, ignoring their beers in favor of making kissy-faces. She settled with her back to a corner and studied the other people in the place. Stalling. Postponing the moment when she found Sam Remington, or didn’t.

Three guys at the bar shouted at a replay of a European soccer match on the TV over their heads, groaning loudly when the goalkeeper made a diving save. At the other end of the battered expanse of oak, a grizzled old man held up two fingers at the bartender. He added some whiskey to the old guy’s glass, and when he spoke, his deep, slightly rough voice reached Riley easily.

“I can count,” the old man groused, but he winked at the bartender and pulled a few crumpled bills from his pocket. A dimple flashed in the bartender’s cheek before he turned to deposit the money in the till.

Riley sagged into her chair, her eyelids stinging. She’d found him. Maybe he could help her, maybe not. But for the first time in months—hell, in years—she had a move to make. Half an ounce of control, or at least the illusion of it.

Sam looked a little different from the video she’d watched, oh, fifty-five times on the website for the Society for Goddess Education and Defense. His dark hair was longer, for one. Shaggier. It looked just as silky, though, when he shoved one side behind an ear. And his T-shirt hugged his chest and biceps much more lovingly than the tidy button-down he’d worn in the video. She wouldn’t have guessed he was so tall, either. At least six foot four. Her head would probably hit the center of his chest.

She swallowed and glanced away. The image that had flashed through her mind was definitely ill timed. No reason her head would ever have occasion to meet his chest. But if it did…

Riley jerked her head up. In the few seconds she’d been fighting her thoughts, Sam had crossed the bar to her table. Why wasn’t there a waitress working so he didn’t have to leave the bar? Damn the assholes who’d taken her car and made her get here so late.

The soccer guys called goodbyes over their shoulders, and the couple followed them out. Sam waved and then rested his hands on his hips, waiting for her order. She cleared her throat, the sound loud in the now-quiet bar. The TV was off. Maybe she’d been lost in visualization longer than she’d thought. And there was that chest again, the hollow between his collarbones set off perfectly by the slight V-neck of his gray shirt.

“Yes,” she said even though she hated Pepsi, just so he’d walk away sooner. She needed time to think, to figure out how to approach him. She hadn’t practiced anything before now, afraid to hope a vague Facebook reference could lead her to the right place.

Traveling to Connecticut wasn’t a big deal, since she’d been on the move for what seemed like forever, but she didn’t want to expect too much and be flattened when she wound up in limbo once again.

So while Sam drew her soda from the tap, she tried to come up with an opening gambit. It wasn’t easy with her brain so fogged from fatigue. She’d been sleeping in her car as she traveled, not having enough money for a motel anymore. She’d walked a few miles to get to the bar, too, and while she wasn’t out of shape, it added to the toll of a stressful day after a very long string of stressful days. And it was well after one in the morning.

She took a deep breath and shook off the haze. She shouldn’t lose this opportunity. What if she didn’t get it again? So maybe just keep it simple. Hi. What do you know about goddesses?

No, that was stupid. She knew what he knew—it was all over the Society website. Brief mentions in news items and meeting agendas and press releases, plus that video about a new educational program, all added up to “this guy is connected.” But he wasn’t one of them. He couldn’t be—he was male. That was the only reason she was here.

Maybe it would be best to blurt it all out. I need your help. I’m all alone and crazy things are happening all around me, and everything I’ve been raised to believe has been flipped on its head. Goddesses don’t exist, but if that’s the truth, then I must be crazy. 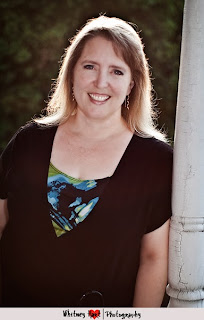 Natalie J. Damschroder is an award-winning author of contemporary and paranormal romance—Love with a Shot of Adrenaline. She sold her first book in 1999, and 2013 will see the publication of her 14th novel. She grew up in Massachusetts and loves the New England Patriots more than anything. (Except her family. And writing and reading. And popcorn.)

When she's not writing, revising, proofreading, or promoting her work, she does freelance editing and works part time as a chiropractic assistant. She and her husband have two daughters she's dubbed "the anti-teenagers," one of whom is also a novelist. (The other one prefers math. Smart kid. Practical.)

Everybody Needs a Little Romance
www.everybodyneedsalittleromance.com