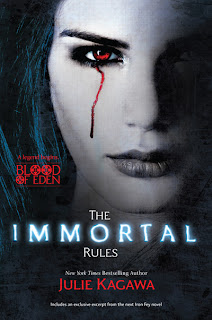 We've still got to wait until May 2012 to get our hands on this bad boy.


You will kill. The only question is when.

In the dark days since the insidious Red Lung virus decimated the human population, vampires have risen to rule the crumbling cities and suburbs. Uncontested Princes hold sway over diminished ranks of humans: their "pets." In exchange for their labor, loyalty and of course, their blood, these pets are registered, given food and shelter, permitted to survive.

Unregistered humans cling to fringes, scavenging for survival. Allison Sekemoto and her fellow Unregistereds are hunted, not only by vampires, but by rabids, the unholy result of Red Lung-infected vampires feeding on unwary humans. One night, Allie is attacked by a pack of rabids, saved by an unlikely hero...and turned vampire.

Uncomfortable in her undead skin, Allie falls in with a ragtag crew of humans seeking a cure, or cures: for Rabidism and for Vampirism. She's passing for human...for now. But the hunger is growing and will not be denied. Not for friendship—not even for love.

I really love this cover. It's so different from the covers for The Iron Fey series, which are bright and fantastical. The cover for The Immortal Rules is dark and edgy. It shows us a peek at how the world of the book is. I'm excited to see how the transition from fey to vampires goes.
Posted by Christina @ Biblio Thoughts at 11:15 AM