Cover Ogle (#1): In the Service of the King by Laura Kaye 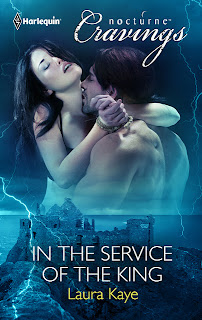 This is definitely a cover worth ogling, don't you agree?

Laura Kaye revealed the cover of her new book set to be released in February of 2012 by Harlequin Nocturne Cravings today.

Here's the query blurb so you have an idea what this book is about:


Kael the Fair, one of seven reigning vampire warrior kings, loathes the Night of the Proffering—the night he must feed from a human female virgin to maintain his immortality and his humanity.  By feeding directly from the veins of the Proffered as he takes her virginity, Kael could determine whether the mating bond exists between them—but war and a previous loss lead the king to refuse to take a mate.  Groomed for the Proffering, twenty-year-old Shayla McKinnon risks her promising academic career to make two other dreams come true—vengeance for her sister's murder at the hands of the evil Soul Eaters and the impossible goal of capturing the Warrior King’s heart.  In the feeding chamber this night, a battle of wills ensues, one played out through a game of domination and submission that might prove dangerous to both of their hearts.

Now if that doesn't pique your curiosity, I don't know what does. I'm really intrigued by this story and I'm already getting excited for it's release. You can never go wrong with vampires, that's for sure.
Posted by Christina @ Biblio Thoughts at 5:35 PM