A heartthrob without a heartbeat: Nicholas Hoult plays a zombie in search of love (and brains) in 'Warm Bodies.'

Here are the first photos released for the Warm Bodies movie: 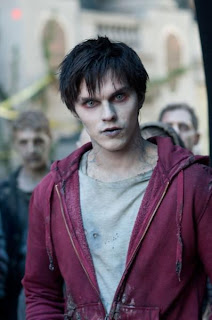 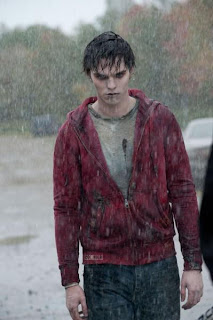 Zombies love people, especially their brains. But R (Nicholas Hoult) is different. He’s alive inside, unlike the hundreds of other grunting, drooling undead—all victims of a recent plague that drove the remaining survivors into a heavily guarded city. Now the Zombies roam about an airport terminal, searching for human prey and living in fear of the vicious Boneys, the next undead incarnation.

One day, R and his best friend M lumber toward the city in search of food. There, R first sets his eyes on JULIE (Teresa Palmer), a beautiful human. Determined to save her—first from the other Zombies and then from the Boneys—R hides her in his home, a cluttered 747 aircraft. Julie is terrified, and R’s grunted assurances of “Not…eat” do little to calm her. But when R begins to act more human than Zombie, coming to her defense, refusing to eat human flesh, and even speaking in full sentences, Julie realizes that R is special.

After a few close calls with the Boneys, and with her father mounting an armed search for her, Julie realizes she can’t hide forever. So she sneaks back home, leaving R broken-hearted. Desperate to see her, R decides to comb his hair, stand a little straighter, and impersonate a human long enough to get past the city guards. If only he can prove to the humans that Zombies can change, maybe R and Julie’s love might stand a chance. But with the rampaging Boneys heading toward the city and Julie’s father intent on killing R and his Zombie friends, the stage is set for an all-out battle between the living and the undead.

A genre-bending tale of love and transformation, WARM BODIES is a story about a boy who loves a girl…for more than just her body.