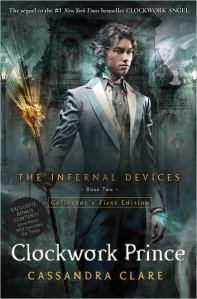 Jem’s knees gave out, and he sank to the trunk at the foot of his bed, still playing. He played Will breathing the name Cecily, and he played himself watching the glint of his own ring on Tessa’s hand on the train from York, knowing it was all a charade, knowing, too, that he wished that it wasn’t. He played the sorrow in Tessa’s eyes when she had come into the music room after Will had told her she would never have children. Unforgivable, that, what a thing to do, and yet Jem had forgiven him. Love was forgiveness, he had always believed that, and the things that Will did, he did out of some bottomless well of pain. Jem did not know the source of that pain, but he knew it existed and was real, knew it as he knew of the inevitability of his own death, knew it as he knew that he had fallen in love with Tessa Gray and that there was nothing he or anyone else could do about it.
Posted by Christina @ Biblio Thoughts at 6:05 PM