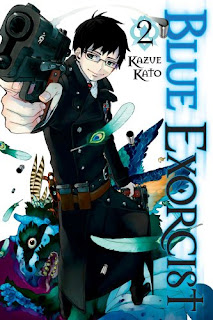 Summary: Shocked by the death of his foster father and the revelation that his real father is the demon lord Satan, Rin Okumura enters the True Cross Academy to learn to be an exorcist. But every great exorcist has to start somewhere, and for the students of the academy the first step is the Exwire examination. To prepare for the exam, the new Pages in Yukio's class must undergo intensive training. Rin and his classmates have their hands full when a demon appears, but is this a test or something more sinister?

In Volume 2 we meet Rin's classmates and get a look at their pasts and what brought them to the academy. As Rin works at making friends and studying to pass his classes, the Exwire exam is fast approaching. The entire class has to work out their differences and cooperate in order to pass the test and move up the ranks. But behind it all Mephisto is scheming and having Rin attacked. But for what reason?

This series just keeps getting better, and it's only Volume 2! Rin's powers continue to grow and it's really cool to see what he's going to be capable of. We know that Mephisto is a son of Satan, but we also meet Amaimon, King of Earth, who is Mephisto's younger brother. It kind of makes you wonder if Rin realizes that they are his older brothers. I really want to know what Mephisto is planning with all of these schemes he's employing.

Things are really heating up as Rin studies to become an exorcist and new characters show up to make things more complicated.

Kazue Katō (加藤和恵, Katō Kazue), born on July 20th, 1980 in the district of Shinjuku, in Tokyo, is a Japanese mangaka, author of shōnen manga. She is mainly known to be author of Blue Exorcist. She also created Robot to Usakichi ( ロボとうさ吉 ), for which she received the price Osamu Tezuka Award.
Posted by Christina @ Biblio Thoughts at 4:04 PM