They torture, deceive and murder - and we love them for it.

We may love these ne'er-do-wells, but we're no villains ourselves; that's why you should take note that massive spoilers follow, so read on at your own peril!

Lelouch vi Britannia (Code: Geass) - Sure, Lelouch vi Brittania is an unrepentant murderer, but he's got pathos. Lelouch is well-intentioned, but ultimately he's a liar, a warmongerer, a manipulator and a mass-murderer with a body count in the hundreds of thousands (many of whom were friends and family). That being said, he meant well and when it came time to pay the piper, he paid in full and tipped 20%.

Light Yagami (Death Note) - It's a rare thing when the protagonist of the series turns out to be a megalomaniacal murderer with a God complex, but Light Yagami had the godlike powers to go along with it. Light makes Lelouch look like Gandhi by comparison, but his life-and-death game of cat-and-mouse with L is so compelling that you're actively rooting for both sides. Being bad never felt so good; you can make a (death) note of that.

Millions Knives (Trigun) - Vash the Stampede is one of the sweetest characters in all of anime; it takes a lot to break him down and even more to make him violate his Batman-like "no killing" rule (albeit indirectly). So when the architect of Vash's misery turns out to be his own brother? That's one hell of a punch to the gut.

Frieza (Dragon Ball Z) - Frieza may have been floating around in a space-age wheelchair, but, like Professor X and Don Salamanca (Breaking Bad) taught us, never underestimate a crippled opponent. Beneath the purple lip gloss is an intergalactic warlord responsible for destroying multiple planets, wiping out an entire race (Saiyans) and slaughtering those who get in his way. Pulling it off in that outfit takes some serious Dragonballs. 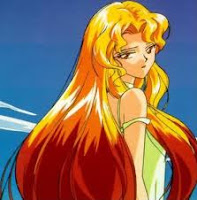 Sailor Galaxia (Sailor Moon) - Sure, Queen Beryl tried to steal Usagi's man, but Galaxia stole his starseed, scoured the galaxy draining planets of their life force, unleashed Queen Nehellenia and effectively murdered the Outer Senshi. She conquered 80% of the known universe, making her the Sailor Moon equivalent of Galactus. Step it up, other evildoers.
Posted by Christina @ Biblio Thoughts at 5:54 PM