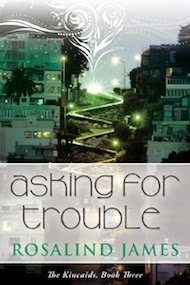 Sometimes you go looking for trouble. And sometimes, trouble finds you.

Alyssa Kincaid knows she needs to make some big changes. A move to San Francisco is the first step. Now it's time to get serious, and to get the rest of her life on track. If only her messy life would cooperate. And if only it had Joe Hartman in it.

Joe knows one thing for sure: Making a move on his best friend's little sister, the beloved youngest sibling in the closest thing to a family he's got, would be asking for trouble. Unfortunately, Alyssa always does seem to be asking for trouble. And it's getting harder and harder for Joe to resist answering.

She hit the door, heard the chime behind her, and knew her new boyfriends were following right along. Until they realized that she was meeting the bike rider, because she could sense them slowing to a stop.

Joe barely looked at her, just reached for her arm and swung her behind him. She peered around from the shelter of his broad back, saw the three guys stopped halfway between the bulk of Joe and the liquor store entrance, looking like they weren't quite sure what to do next.

"You should take better care of your lady," Tall Guy said at last. "Not leave her all alone and lonely like that. She might get into trouble."

The guy laughed, showing his bad teeth. "What? You looking for a fight? Three of us, man."

"I'm not looking for anything," Joe said, and she could see his hands flexing, could sense the readiness in him, like he was poised on his toes, even though he was standing solid. "But I'm happy to take anything that comes my way."

"Hey, man," the guy said with a shrug, taking a half-step back. "Just hanging out." He turned, would-be casual, and the three of them sauntered off, back to their pals, Alyssa presumed.

Joe stood still a moment, watching them go. Then he turned to Alyssa. "You OK?"

"Yeah," she said, her arms wrapped around herself, shivering with cold and tension. "Just freezing." She smiled, and could feel her teeth chattering. She'd really thought he was going to fight. Three guys.

He unzipped the heavy jacket and handed it to her. "Put this on." He watched her struggle with the zipper for a minute, her fingers too shaky for the task, then brushed her hands aside and zipped the jacket for her as if she were a child. Then he took off the helmet and gave her that, too. "I don't have another one with me. Wear this."

She hefted the weight of it. "Uh, Joe. I can't ride a motorcycle. Maybe you could just wait for a cab with me."

"You don't have to ride a motorcycle," he said. "I'll do the riding. You just have to hold on." 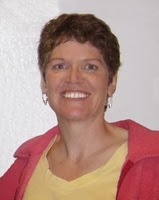 Rosalind James is the Kindle-bestselling author of the “Escape to New Zealand” series and the new U.S.-based “Kincaids” series. Rosalind is a publishing industry veteran and former marketing executive who attributes her success to the fact that “lots of people would like to escape to New Zealand! I know I did!”