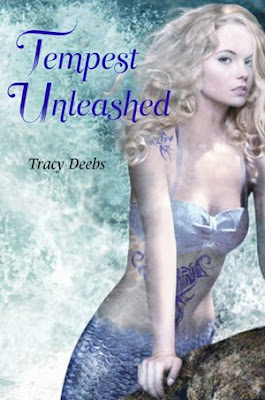 
Tempest Maguire is happy with her decision to embrace her mermaid nature and live among her mother’s clan within the ocean’s depths. Even though training to one day ascend the throne for the aging mermaid queen is rigorous, she finds refuge in the arms of Kona, the selkie who first opened her up to her mermaid side. But when word comes that one of her brothers has been gravely injured on land, Tempest immediately rushes to his side—which also brings her back to her old flame, Mark. And in her absence, a deadly battle begins raging at the hands of Tempest’s old nemesis, the sea witch Tiamat. As the dangerous war erupts, Tempest’s two loves—Kona and Mark, sea and land—will collide for the first time, both to protect her and to force her to choose.

I absolutely love this cover for Tempest Unleashed! I can't wait to see what happens and what Tempest's choice is. I personal hope she chooses Kona and the sea.
Posted by Christina @ Biblio Thoughts at 5:04 PM