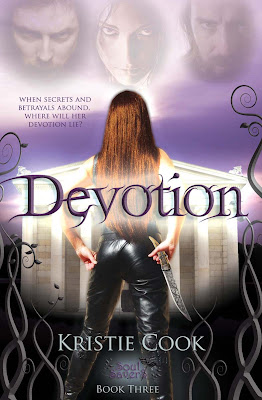 
From the book jacket:

With powerful abilities gained from the Ang’dora and Tristan back by her side, Alexis thinks she’s ready for the next challenge—protecting her son from what appears to be the inevitable. But she has so much to learn about her powers, her new world and the people in it. Nothing is what it seems to be on the surface, including the Amadis. Having believed the secret society to be definitively good and righteous, she discovers she couldn’t have been more wrong.


I'm completely in love with the Soul Savers series. And this cover for the third book in the series is just amazing. Kudos to Brenda Pandos for doing just an awesome job designing the cover for Devotion. Alexis on this cover looks super tough, as well she should be after going through the Ang'dora. The tagline "When secrets and betrayals abound, where will her devotion lie?" leaves me wondering what could possibly happen next after everything that's happened already. I mean, hasn't Alexis been lied to and betrayed enough? I also like that it sticks with the purple color scheme in the background. The covers are so different, but the purple background shows a uniformity to the series.
Posted by Christina @ Biblio Thoughts at 10:42 AM