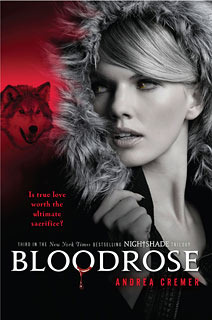 Tagline(s): Is true love worth the ultimate sacrifice?

But now that the final battle is upon her, there's more at stake than fighting. There's saving Ren, even if it incurs Shay's wrath. There's keeping Ansel safe, even if he's been branded a traitor. There's proving herself as the pack's alpha, facing unnameable horrors, and ridding the world of the Keeper's magic once and for all. And then there's deciding what to do when the war ends. If Calla makes it out alive, that is.

In the final installment of the Nightshade trilogy, New York Times bestselling author Andrea Cremer creates a novel with twists and turns that will keep you on the edge of your seat until its final pages. A dynamic end to a breathtaking trilogy.

Bloodrose is the final book in the amazing Nightshade series. Bloodrose is full of twists and turns that will leave you reeling.

I viewed this book as really bittersweet. It seemed that for every victory there was a tragedy, for every joy a sorrow. There was a moment toward the end that left me completely heartbroken. I had to stop reading so I could collect myself.

My favorite part of the whole book was the romance. I enjoy reading stories involving love triangles and anticipating who will eventually end up with who. Though Calla decided she wouldn't choose between Shay and Ren until the war was over, I felt that Ren was never really given a fair shot. It seemed like Calla's decision was made that night in the garden with Shay in Wolfsbane. She always seems to be pushing Ren away instead of giving him the shot he deserved. As a member of Team Ren that kind of bothered me. There were a lot of great swoony moments between both couplings, but my favorite was the shower scene with Calla and Ren.

This is a completely personal opinion, and I'm not saying that I didn't like Bloodrose (I did indeed love this book), but I was kind of disappointed with how the book ended. It wasn't anything like I thought it would end. Most series finales leave a feeling that the characters are still living on and the story continues, but the end of Bloodrose seems more final. Though I didn't like the ending myself, I think that there will be quite a few who do.

This may be the end of the Nightshade series' main story, there is the prequel, RIFT, to look forward to in the summer.

I'd always welcomed was, but when the last battle ends, what life is left for a warrior?
- Chapter 31, Page 395

Andrea Cremer spent her childhood daydreaming and roaming the forests and lakeshores of Northern Wisconsin. She now lives in Minnesota, but she thinks of her homeland as the “Canadian Shield” rather than the Midwest.

Andrea has always loved writing and has never stopped writing, but she only recently plunged into the deep end of the pool that is professional writing. When she’s not writing, Andrea teaches history at a very nice liberal arts college in St. Paul.

In the little spare time she can find, Andrea stares up at trees, rescues infant rabbits from predatory cats, and invents names for pug  puppies with her husband. She has an unfortunate tendency to spill things – white carpets beware!

Her debut novel, NIGHTSHADE, the first of a YA fantasy series, will be published in fall 2010 by Penguin (Philomel).
Posted by Christina @ Biblio Thoughts at 5:20 PM