This Leap Day, we salute shattering the space-time continuum!
Leap Day raises all sorts of questions: if you're born on Leap Day, do you only age once every four years? In celebration of this chronological rarity, we have assembled our top 5 timeless time-travel anime stories.

Brouhaharuhi Suzumiya
With an episode structure seemingly taken from a damaged Memento VHS, The Melancholy of Haruhi Suzimiya is a tremendously enjoyable, chronology-changing romp of an anime. Between Haruhi's reality-bending powers, and more moe than you can shake a stick at, what more could you want?

Quantum Killer
What happens when you combine Mafia in-fighting, time-traveling combat and an infant assassin? Well, you get Katekyo Hitman Reborn, the long-running coming-of-age story with a heavy dose of gangster-fueled action. If only actual organized crime were this entertaining...

Gatekeeper
After a slow, silly start (their microwave sends messages to the past!), Steins;Gate kicks into high-gear and delivers 150 cc's of drama and suspense straight to our anime aorta. The only thing our microwave does is turn frozen burritos into volcanic mouth-burning sadness cylinders.

CLAMP Convergence
Sure, CLAMP's intricate, universe-blending tale Tsubasa: Reservoir Chronicle can be confusing to keep up with, but don't the best things always make you scratch your head at first? Evangelion, anyone? With secret clones, attempted soul-stealing and trans-dimensional drama, Tsubasa is well worth the headache. 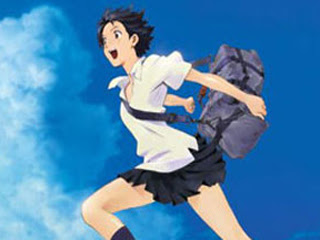 Girl Power
One part The Butterfly Effect, one part Back to the Future and a whole lot of heart, The Girl Who Leapt Through Time conveys both the wonderment and the harsh ramifications that come with altering the past. Even if we had Makoto's powers, we wouldn't change a thing about this film.
Posted by Christina @ Biblio Thoughts at 11:28 AM