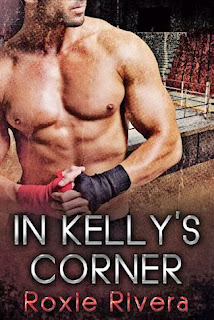 
After a stalker breaks into her home, internet entrepreneur Bee Langston decides Kelly Connolly is the only man who can help her—but  seeking help from the former Marine isn’t easy, especially after she made a spectacular fool of herself trying to kiss the sinfully sexy bodyguard.

When Kelly spots Bee weaving her way through the Houston nightspot where he’s working security, all those feelings he’s desperately tried to deny for his best friend’s sister come flooding to the surface. He’ll do anything to keep her safe, even if means getting up close and personal with the one woman he simply can’t have.

Soon, Bee’s stalker isn’t his only problem. His gambling addict father is tangled in a mess of debts to two of Houston’s toughest loan sharks. With the family gym on the line, there’s only one way for Kelly to make everything right. He agrees to fight for the Albanian mob in an underground bare-knuckle fighting tournament.

But winning the tournament and saving his family’s legacy comes at a high price—one that just might cost Bee her life.

For the Fighting Connollys series, I wanted to tell the stories of three brothers—Kelly, Jack and Finn Connolly—fighting to save their family legacy. After a rough childhood that included losing their mother and enduring their alcoholic, gambling addict father's abuse, the brothers joined the Marines and survived some truly harrowing moments while deployed multiple times. Each of the brothers lost something over there—a best friend, partial vision and a leg—and now they're trying to rebuild their lives.

The idea of writing about three emotionally and physically wounded alpha males was one I simply couldn't dismiss. Deciding to write about three brothers gave me the chance to explore some interesting themes—brotherhood, sibling rivalry, humor, guilt and even forgiveness. Throw in three love interests and some suspenseful action, and things get interesting very fast!

In Kelly's Corner is the first in a spinoff trilogy from my Her Russian Protector series. In the HRP universe, the heroes of the first four books share brother-like bonds forged in their very early years living in an orphanage. Ivan, Dimitri, Yuri and Nikolai came to Houston to start over and build better lives—and end up rescuing their damsels in distress from the Albanian mob, a Latin street gang, a shady real estate developers, a Mexican drug cartel and a madman hell-bent on usurping a certain mob boss' throne. Kelly, one of Dimitri's employees and Yuri's former bodyguard, finds himself facing some of those same foes—including two of the most notorious loan sharks in the city.

What can I say? Fictional Houston's underbelly is a pretty seedy but dangerously sexy place!


I like to write super sexy romances and naughty erotica that make your pulse pound. You can get updates on new releases by visiting my website (roxierivera.com), signing up for my newsletter (http://eepurl.com/sX-z1) or liking my author page on Facebook.