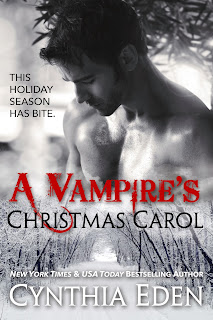 Tagline: This holiday season has bite.

Summary: Ben Prescott hates Christmas—he’s a vampire, and to him, there’s certainly nothing jolly about the holiday season. While the humans are running around being merry, he’s hunting in the shadows. Ben plans to spend the holidays his way…by stalking deadly prey.

But fate has other plans for Ben.

Three visitors are coming Ben’s way…A demon who will force Ben to face his past, a ghost who will show Ben the present he could have, and a shifter who will reveal the darkness that waits in Ben’s future. Unless Ben can change his ways, he may just turn into a real monster, one who can’t be saved by anyone or anything.

’Tis the season…to be undead.

Ben’s redemption rests in the hands of the one woman he loved and lost—Simone Laurent. If Ben is going to have a chance at being more than just the beast in the darkness, he has to prove himself to the lovely Simone. A very hard task, considering that, once upon a Christmas Eve, Simone died in Ben’s arms…

In A Vampire's Christmas Carol, Cynthia Eden has brought us a paranormal version of the classic Christmas story. Ten years ago, as he was meeting his girlfriend to propose, Ben was attacked by a vampire, turned, and left with the message "Welcome to the darkness." It wasn't until the death of his girlfriend that he was really plunged into that darkness. Now, ten years later, Ben is really close to becoming the true monster that people fear in the darkness. But three people from his past have come back to show him the past, the present, and the future, in the hope that he will change and take hold of the second chance that he's being offered.

Since Simone's death, Ben's been hunting criminals and killing them. But while he's in his own dark world, there are many things happening around him that he should have noticed but didn't. If he continues along his current path, he will be lost forever and this is what motivates someone from his past to risk everything to save him. Three visitors - a demon, an angel, and a shifter - show him key moments from his past, present, and possible future in an attempt to show him that he need to change. That his existence influences more than just himself. That he can do more than just kill. That he has worth.

I have loved every book by Cynthia Eden that I have read to this point, and it's no different with A Vampire's Christmas Carol. The characters are likable, and I really took a shine to William and Jamison. Ben became a broken man when he lost Simone, and even though he is very close to losing himself to the darkness completely, you can still see pieces of who he was before he was turned. And Simone is definitely completely devoted to Ben, even when she was away from him for so long. I had to admire her. And I even liked Cale. He has a small role in this story, but it's a very important one.

A Christmas Carol is one of my all time favorite Christmas stories, and it was just really awesome to read a paranormal version from one of my favorite authors in this genre. Although the characters are different, the story is just as powerful in its message. Even the most dark person can change for the better given the right motivation. All it takes is one moment to change everything.

Lust clawed through him. The need, the red-hot desire, seemed to burn Ben from the inside. He grabbed Simone, yanked her flush against him. His mouth locked on hers. He’d always tried to be so careful with her in the past. Played the gentleman because she mattered.

He wasn't a gentleman any longer. Ben wasn't even sure what he was. He just knew he needed Simone naked, and he had to be in her.

He carried her back to his bedroom. He ignored the glittering New York skyline. She was the only thing he could see. Desire pounded through him. His cock was so swollen that he hurt and—

His teeth were extending. Stretching in his mouth.

Ben dropped Simone on the bed and stepped back, horrified.

“Ben?” Simone sat up on the bed and pushed back the blonde hair that had tumbled forward. “What’s wrong?” She was so gorgeous and sexy staring up at him. Looking at him with those wide, dark eyes.

I’m going to hurt her. He grabbed for the control that he’d always held so easily in the past. Only that control was broken. Shattered. “You need to leave.” 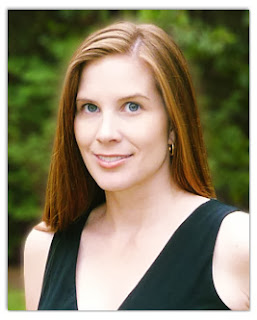 Cynthia is a southern girl who loves horror movies, chocolate, and happy endings.  She has always wanted to write (don’t most authors say that?), and particularly enjoys creating stories about monsters–vampires, werewolves, and even the real-life monsters that populate her romantic suspense stories.

Cynthia’s foreign sales for her books include translations to Japan, Germany, Thailand, Greece, and Brazil.