It's a double-cover reveal (and a sale!) for author Kristie Cook's The Book of Phoenix series! The cover of The Space Between (Book 1) has been made-over, and we're sharing for the first-time ever, the title and cover for Book 2 (see below). 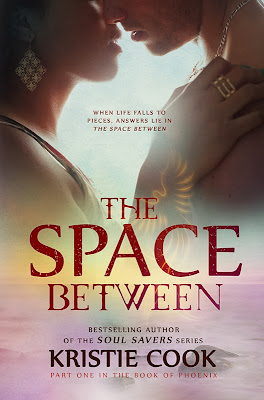 When Life Falls to Pieces, Answers Lie in the Space Between

Leni Drago can't make a smart decision on her own, according to her mother anyway--the few times she's tried resulted in disaster. When her uncle sends her on a dance tour in Italy to find her real self, she returns to an empty home and any evidence of his existence wiped out. Then things get even stranger, like the mysterious appearances of Jeric Winters--inked, pierced and a hit-'em-and-quit-'em type. He's one decision that should be easy for Leni. Or is he?

Jeric doesn't do girlfriends. Unless they're someone else's. He left the fighting cage and modeling for a reason, and girls who want more than a night of fun are distractions he doesn't need. Especially when they come with as much baggage as Leni carries. But he can't shake the gut feeling that he needs to know her. All of her.

To discover the truth behind their connection and their ties to a journal from 1989, they must face painful secrets from their pasts. And they must do so quickly because their own existences are falling to pieces.

This first part of The Book of Phoenix takes you on a heart-wrenching ride as you discover the answers that lie in The Space Between. 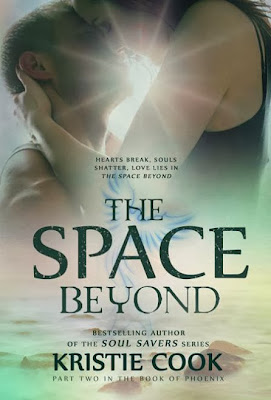 In this second installment of The Book of Phoenix series, Leni and Jeric are (re)learning their roles as the Phoenix Guardians and becoming the leaders they once were while taking on their first mission - guiding a Separated soul to the Gate. But that soul has her own issues, including supporting her sister and their deathly ill parent while dealing with an ex who doesn't want to be an ex anymore and a budding romance with a guy who could be her saving grace...or her fatal end. The last thing she needs right now is a couple of psychos trying to convince her that she'll never find her soul's other half except through them. What does that even mean, anyway? And why on Earth should she trust them when they don't even trust each other?

To celebrate, The Space Between is on sale for only 99c through January 1, 2014!

Kristie Cook is a lifelong, award-winning writer in various genres, from marketing communications to fantasy fiction. She continues to write the Soul Savers Series, a New Adult paranormal romance/contemporary fantasy, with the first four books, Promise, Purpose, Devotion, Power and Wrath available now. She’s also written a companion novella, Genesis: A Soul Savers Novella, currently available. Over 300,000 Soul Savers books have been sold, with Promise peaking at #54 on the Amazon Top 100 Paid list and at #1 in the Amazon Fantasy category.

The Space Between kicks off her second New Adult paranormal series, The Book of Phoenix.

Besides writing, Kristie enjoys reading, cooking, traveling and riding on the back of a motorcycle. She has lived in ten states, but currently calls Southwest Florida home with her husband, three teenage sons, a beagle and a puggle.

She can be found at: