Book Blitz: Dawn of the Apocalypse by E.S.P. (Giveaway) 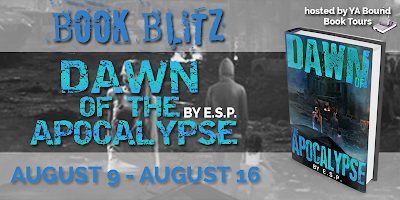 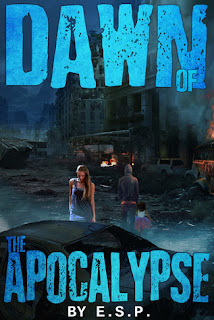 These are just a few of the days humans prophesied as bringing catastrophic events that would end the world. We predicted nuclear warfare. Drastic climate change. A call from God.

Cue the gargoyle invasion—laboratory bred mutants designed to slaughter humans. When the government goes AWOL and gargoyles are swarming by the hundreds, it's up to the citizens of the United States to regroup and save themselves.

Meet Cliff Matthews, a teenage boy separated from his entire family with the exception of his younger sister, whom he is desperate to keep alive. Along the quest to save their lives, he encounters people who aren't all that they seem. Everyday's a battle, but if he can't trust his own species, where does that leave his family?

And we can't forget the man who may be willing to sacrifice Cliff's life, if it means world domination.

In terms of doomsday, no one could've seen this coming. The dawn of the apocalypse…

It was barely a second after she locked the door before it pounded on it. And then the screams began.

The scream was so high pitched and devilish that it turned her insides out. She dropped to her knees, sobbing in agony. The screams ripped through eardrums and strummed against her soul. Warm tears flooded through her eyes like rivers.

Angel screamed, flailing around in Hunter's arms. It took all her strength to restrain her. As she bit her lip, she tasted blood.

Now she knew why the gargoyle screamed like that. It made a person willing to kill themselves. It made her willing to sacrifice her life, if only the torture would discontinue.

She choked as something gushed down her face. She put her hand under her nose. When she brought her fingers from her face, they were covered in blood.

If she stayed here any longer, she would die. And so would Angel.

A force heavier than gravity was pulsing through the air, pushing Hunter towards the ground while she tried to get up. It was bone crushing. She felt her insides melting.

The tears continued to slide down her cheeks, though her screams had stopped. She was hollow.

She picked herself up, pushing through the weight of the air. The room was small, she could tell. There had to be some type of exit...some way to get out. She blindly felt the walls with one hand. There needed to be an exit door or an escape hatch or maybe just a window. There had to be. 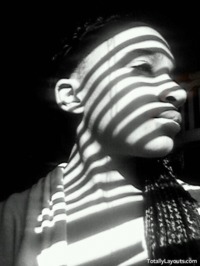 Being the daughter of an accomplished author, E.S.P. grew up listening to stories and telling her own to classmates. After writing for several years and even publishing some short works, she finally decided to take the plunge to write (plus finish!)a full length novel. Thus, Dawn of the Apocalypse was born. When she's not writing, she's either reading books, blogging at whoistheserialreader.blogspot.com, or watching eighties movies.