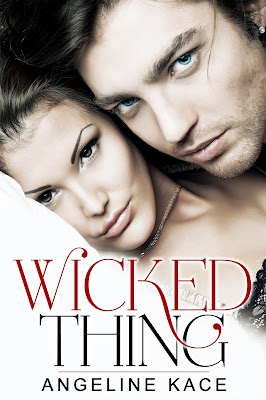 Carmyn Rafferty witnessed the aftermath of her mother's affair. She learned at a young age not to trust anyone. Especially not your spouse. So she's planned. She's planned every detail of her life: who her husband will be, what their careers will be, what their lives will be like. All to avoid the pain of infidelity.

Dallas Brown lives a life all his own. He doesn't do relationships, he doesn't care what anyone thinks of him, and he doesn't live up to anyone's expectations but his own.

When Carmyn's fiancé cheats on her, it sends her into a whirlwind of one-night stands with the most infamous player on campus. She can't seem to stay away from this tough guy and his dangerous motorcycle. Everything about him is the complete opposite of who she'd planned to fall in love with: tattoos, dark stubble along his jawline, and hair that brushes his shoulders.

As Dallas and Carmyn begin to fall deeper and deeper into each other, they learn that love can truly be a wicked, wicked thing.

I shoot some darts with the guys, losing some, but winning mostly.

Carmyn looks over at me a few times, always looking away when our eyes meet. She’s watched us play most of this last game, so I grab the darts out of the board and walk over to her. “Play me.”

She tries to hold back her smile. “I don’t have any cash on me.”

She looks me up and down. “What the hell.” She shrugs. “And if I win…” She studies me as if she's not sure what's worth my price. “You have to teach me how to drive your motorcycle.”

The crowd roars with a loud, “Ooooohhhh!” and she’s grinning like a god damn magician. That’s a good one. She’s gotta know I don’t let anyone drive my bike but me. Everyone knows it. It’s my baby. But I’m confident I’ll win. She’s dancing tonight like she’s reached a perfect buzz level—drunk enough to let loose, but not too drunk to fall ass over face. And on the point-oh-five percent chance that I do lose, it’ll get her on my bike, spreading her legs to straddle the leather and steel. No matter how much I’ve stuck to my self-imposed rule of “no chicks on the bike,” that alone might be worth the small risk.

But shit. To let her drive it. I just don’t know. That’s a lot. “You know I don’t let anyone drive it, right? Hell, I don’t even let the ladies on for a ride.”

She grins, again challenge accepted. “Well, you know I don’t go around betting to let just anyone kiss me, right? And I doubt this is anything less than a once in a life time opportunity.”

It only has a single seat, so I won’t be able to be on there with her to help her drive it. I specifically asked for the single 1939 Harley Davidson seat during the build. Every detail of this bike was thought through.

Vick’s glaring at me from the sidelines. She’s tried on numerous occasions to talk me into taking her for a ride. Even going so far as to offer sexual favors, or incentives as she calls them. Which of course I could never accept. She’s gonna be pissed.

“Do it. Do it!” the guys start chanting.

I’ve never seen her play when the brothers get a game going. I don’t think I’ve ever seen her watch much of our games before, either. And that pussy of an ex-boyfriend of hers has never had the balls to throw any money down. Shit. I gotta do it. I present the darts to her. “Do you wanna start, or shall I?”

The crowd whoops, and Ava runs up and hugs her. “I’m so proud of you,” she yell-whispers into Carmyn’s ear. Carmyn pats Ava’s arm and then steps forward, wrapping her fingers around the darts in my palm.

I curl my hand, catching the beveled darts between our fingers. “Do you know how to play?”

“Outer ring is double, inner ring is triple. First to zero wins.” She yanks the darts out of my hand when I’m too stunned to do anything but let them go.

Shit. Is she trying to hustle me?

She walks back to the line we’ve taped on the scratched hardwood. It’s sexy as hell seeing her walk over there like she owns it. That doesn’t mean she’ll win, though. My shot is straight and accurate. Even if she does know how to play, I doubt she’s better than me.

She shoots pretty well. I’m surprised why she never plays more; she could win a shitload of money from these drunk clowns.

Still, I should win this round. Carmyn has one hundred nine points left, and I’m down to fifty-four. I could hit a triple eighteen, but I can’t win on the first dart because I’ll appear too eager. And I can’t win on the third and final dart of this round because I’ll look like a chump. I survey the board and do some quick math, figuring out where I have to hit to get the numbers I want from each dart. I shoot the first dart and hit a single four.

“He’s got this,” Randall calls.

I do. I look over at Carmyn and she’s holding back a smile, shaking her head. “Nope. You’re not gonna hit it.”

I’ve been avoiding that the whole game. She doesn’t think I can hit it. I wet my lips. That kiss is mine. I throw the second dart and it sinks into the center of the board.

I raise my fists into the air and hop on my toes while the crowd cheers.

Carmyn’s jutting out her jaw and shaking her head.

I move the couple of steps over to her, taking my time. “I’ve come to collect what’s mine,” I warn her.

“Right here?” She glances around at all the bystanders.

“They’re all invested now too. They’re not about to look away now.” I drop my voice. “Better make it good.”

“I believe this is yours.” I hand her the last dart in my hand. “And this is my mine.” I cup her face in my hands before she can think anything else, and I kiss her.

Her lips pucker, but I’ve worked for this, so she better give me more than that. I open my mouth slightly and she mirrors me. My tongue strokes her upper lip gently. Hers reaches out and caresses mine. When she pulls her tongue back to stroke again, I open my mouth to a full kiss. Our tongues run along the other’s, tasting, taking in the firm but giving sensation as they meld together and then pull apart.

The room is loud around us, but I tune everyone out. I’ve kissed a lot of women before, but Carmyn’s is more than that. From her breaths mingling with mine, to the delicate way she tilts her head. I knew the bet would be worth it.

Angeline is a Scorpio living in the Rocky Mountains with her husband and two dogs. She loathed dogs and their "stick to me everywhere" hair until she fell for a pit bull.

She works full time at CPA firm and is going to school to get her Accounting degree. While she's slaving away, trying to figure out why accounts aren't balancing, she's dreaming about books.

She started reading seriously- staying up all night to finish a book and buying every new release she could afford- after finishing Twilight. Say what you want about the series, but it got a lot of people reading, so it's brought more to this world than just sparkly vampires.

She loves all things paranormal, but her favorites are vampires, werewolves, and zombies. In that order.