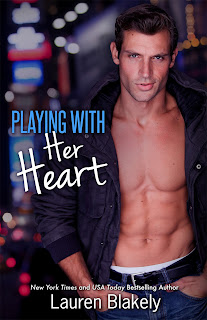 PLAYING WITH HER HEART:

When you’re acting the role of a lifetime, how can you know if love is real—or all just a part of the show?

Twenty-three year old rising theatre star Jill McCormick has built a life out of pretending. Pretending she’s happy, pretending her long-distance crushes add up to something real, pretending she’s not haunted by the dark secret that shattered her world six years ago. Cast in her first Broadway show, she desperately needs to keep her façade intact, but that’s before she comes face to face with her devastating new boss…

Hot-shot director Davis Milo knows the first rule of directing: never fall for your leading lady. Captivated by Jill’s raw talent, he fights his feelings, but watching Jill on-stage with another man is more than his jealous streak can take. Keeping things professional isn’t an option. He wants all of her.

Soon the ingénue and her director are staying late in the empty theatre, their private rehearsals spiraling into new, forbidden territory. Caught up between fiction and reality, Jill struggles to find the truth in all their staged kisses. But how can she be sure that what she feels is real, and not a part of the play? And when two people spend their lives pretending, what happens after the final curtain falls?

She leans her head back, closes her eyes, and lets me run my fingers through her hair. I gather her hair at the top of her head, the thick strands laying across my palms like silk waterfalls. I begin weaving one strand into another, then gathering another layer, recreating the French braid I saw her wearing the other day. The one that made me think of a moment of intimacy, when Paolo and Ava come closer together through touch before they kiss in the next scene. A tender moment, where he wants to take care of her, get her painted hair out of her face. I reach the point in the braid where I’m at her neck, and now I’m simply looping one strand over the other. There are no more lines in this scene until hers at the end, and as I finish I stare at her neck, at the way a vein seems to be beating harder, and then I listen, and her breaths sound like tiny little sighs.
I stop moving for a second, trying to collect myself. I am fighting everything in me that’s dying to touch her. I somehow find the strength to return to character, pulling a rubberband from my pocket, and fastening her braid. She turns around, and looks at me.
That’s not in the blocking. That’s not how she did it this afternoon with Patrick. She didn’t look at him. She uttered the last lines while gazing out at the audience, her body language saying how she felt, as she leaned into him, showing that she trusted him.
But now, she’s leaning back against my chest, and turning to look up at me. A tiny whimper escapes her throat, before she says, “It feels so good.”
I have no idea if she’s acting. If she’s Ava, or Jill, or both. If she’s acting, she’s so fucking convincing because her face says she’s never been more aroused in her life.
My hands are still on her back, my thumbs tracing the tiny strands at the end of her braid. She doesn’t break her gaze, nor do I. I don’t know what’s going on. I don’t what’s happening. But for the first time I don’t feel like I’m in control anymore.
She is.
I stay completely still.
She counters me by shifting closer. “What is happening here?” Her voice is unsteady as she says a line that’s not in the script.
“You tell me,” I say, and I’m not even sure where my own voice is coming from.
She turns around, uncrosses her legs, and mirrors me, kneeling. “You wrote that scene for me, didn’t you?”
I nod. My throat is dry. I can barely speak.
“That day you saw me with Shelby outside the theater, right?”
“Yes.” I swallow. I’m a fucking open book now.
“Did you write it because it makes the show better? Or did you write it for me?”
I close my eyes briefly. I’ve never had an actress question me like this. Then I look at her. “I put the scene in the show because the show needed it,” I answer with as much confidence as I can muster, grabbing the reins from her.
“But you’re also kind of into my hair, aren’t you?”
Now she’s in control in again. My chest rises and falls, and she is looking at me with such a challenging stare, and so much want in her blue eyes. Her breath is staccato like mine. She raises her hands behind her head, pulling out the rubberband, shaking out her hair, and letting it fall around her face.
I am undone by her.
My hands are twitching to touch her. I am aching to taste her lips.
“Do it,” she breathes out in a voice so low it’s barely audible, but it’s all I need.
I place my hands on her face, and cup her cheeks, and she closes her eyes and sighs. Then my hands thread through her hair, and I pull her to me, pressing my lips to hers again. I am unable to stay away from her.
Her lips are soft and full and greedy. But I like to lead, so I kiss her deeply, possessively, twining my hands through her glorious hair, as I trace the soft underside of her lips with the tip of my tongue, eliciting the sexiest moan from her that I kiss away. I nibble on her bottom lip, and she gasps. “Davis.”
My name alone sends me into another realm, and before I know it I am tugging on her hair, exposing her neck, and roaming my mouth down the gorgeous column of her neck, and right before I reach her shoulder blade, I press my teeth to her skin, lightly, but enough to make the smallest of marks.
“Ouch,” she says, but the word tapers off, and the next thing she says is more, in a breathy whisper that turns into a groan of pleasure as I give her what she wants.