Cover Reveal: The Girl of Fire and Lightning by Harrison Paul 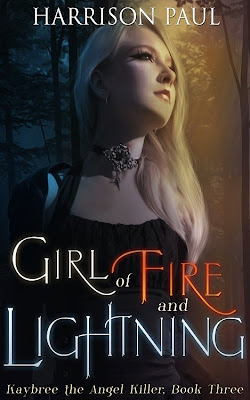 While Kaybree continues to defend the city against the Angels, she also investigates her mother's secret society. She wants to believe that her mother will use the Witch's power for good, and wants to trust her heart and conscience to Galen. But are the Angels oppressors as he claims, or are they trying to prevent her mother's inventions from destroying the world? Kaybree's fate hangs on her ability to trust Galen, but as he takes charge of the city's defense and navigates its political currents with a manipulator's touch, she wonders which face he shows is his real one.

When the next Angel prepares to send a legion of monsters against the city, she journeys into the depths of the forest to stop the attack. The battle for humanity begins, and Kaybree must learn the truth of her mother's inventions or risk plunging the world into darkness and ruin. As she confronts the true villain responsible for the Angel attacks, she must also make a decision that will determine the future of all Nordgard.


Harrison Paul is the author of KAYBREE VERSUS THE ANGELS, the first volume of a young adult fantasy series set in alternate history Scandinavia, where a teenage girl must battle Angels to protect her town. Subsequent volumes are set to be published this summer.

Harrison has worked as a heavy metal musician, a Chinese translator at Nanjing University, a morning custodian, and a math and science tutor. He also served a two-year mission for the Church of Jesus Christ of Latter-day Saints in Taipei, Taiwan. He currently teaches high school Mandarin.