Tour: Once Upon a Wallflower by Wendy Lyn Watson (Excerpt/Giveaway) 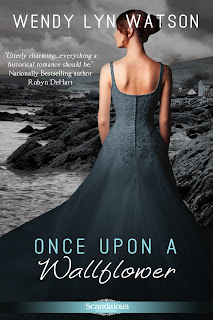 Once Upon A Wallflower
Wendy Watson

When Mira Fitzhenry’s guardian arranges her engagement to one of the most scandalous lords to ever grace the peerage, all of society is abuzz. After all, the man has left a trio of dead young women in his wake, including his first fiancée. But Mira doesn’t see a killer in Nicholas’s moonlight eyes, and she resolves to find the real murderer before the wedding.

Expecting to scare the chit away within five minutes of meeting him, scarred and brooding Nicholas, the Viscount Ashfield, is intrigued by Mira’s tenacious resolve to prove his innocence. She’s not put off by his imposing appearance, but his family’s dark secrets mean he cannot let her get close.

“Mira, open your eyes and look at me.”
He was surprised that she did as he asked.
“Mira, your cousin is dreadful.”
She frowned in confusion.
“I was trying to think of a diplomatic way to say it,” Nicholas continued, “but there really is no way around it. The girl is dreadful. I suppose one might say she is pretty, if one had a penchant for girls with all the complexity and color of a cup of warm milk. But she does not appear to have one whit of sense. She never ceases to squeal and squawk about every meaningless bit of drivel. It is quite maddening.”
Nicholas paused for breath. “I am sorry to be so blunt, but Bella Fitzhenry is possibly the most horrid creature I have ever met.”
Mira’s eyes were wide with alarm. She looked at him as though he had gone mad.
“Mira,” Nicholas said, softening his voice, “your aunt and uncle may think they have cheated my family in some way. In fact, it may be that my father does feel cheated. But I assure you that I do not. I think your aunt and uncle did me a great service by bringing you to that ball in place of your cousin. For that alone, I am forever in their debt.”
Mira shook her head slowly. “No,” she stated emphatically, “no, I would not have lies between us.”
Nicholas released an impatient sigh. “Mira, you are a clever girl. Cease being so mulish about this. You must realize that I am being perfectly honest.”
“But how can that be?”
Mira sounded genuinely distressed. Nicholas could not grasp why she seemed so desperate to believe that he was disappointed, so reluctant to accept that he preferred her to her cousin.
“It simply is,” he finally answered.
“But she is so beautiful.”
Nicholas narrowed his eyes, trying to pin down the frustrating woman before him. “Do you really think me so shallow, that I should only be interested in a woman’s appearance?”
“No,” Mira responded, puzzlement slowing her words, “no, of course not, but…”
“Mira-mine,” he questioned softly, “what do you see when you look in the mirror?”
She frowned, suspicious. “I see myself.”
“Yes, in a way. But seeing is not an objective exercise. Think of my paintings. They reveal how I see the world, colored with my own emotion. When you look in the mirror, you see the actual image of yourself there, but you also see what you expect to see. You see every unkind word your aunt and uncle and cousin have said about you. You see every feature that does not meet Society’s standards of what is beautiful.”
“Oh.” Mira’s voice was quiet, still uncertain.
“Would you do me a favor?” He waited for her to nod in agreement. “Tonight, look in the mirror and try to see what I see when I look at you. Try to see a woman with hair the decadent color of Chinese poppies. Try to see a woman with skin as rich as Devon cream, and eyes the startling blue of lapis lazuli. And, more importantly, try to see the fire and the intelligence and the good, true heart that make you the person you are. Because,” he added, his voice rough with the vehemence of his words, “I think that if you look in the mirror and see what I see, you will understand why I am glad to be marrying you rather than Bella.”
With that, he pulled her close, kissed her hard on her still-trembling lips, and then stalked out of the room.
As he made his way back to his tower room, his leg throbbing from overuse, he licked the salt of Mira’s silent tears from his lips. There was no doubt that her arrival in his life had heralded the end of his solitary existence. For better or worse, his life would never be the same. The only question that remained was whether the upheaval of his life was for the better. Or for the worse. 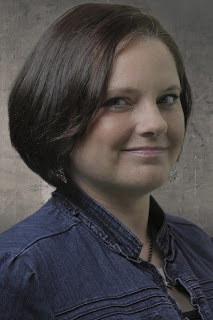 Wendy Lyn Watson writes mysteries of all types: contemporary, historical, and cozy. Whatever the time or the tone, her mysteries always feature a dose of humor and a dollop of romance. Her first cozy series, the Mysteries a la Mode, feature the owner of an ice cream parlor in a small Texas town.

Once Upon a Wallflower, due to be released in August of 2013, is a Regency-set romantic mystery. While Wendy does not commit (or solve) mysteries in real life, she can kill a pint of ice cream in nothing flat. She also enjoys 80s music, Asian horror films, quilting, and vegetarian cooking.

While she was born in Ohio and has called half a dozen states home, she currently lives in a college town in North Texas along with her husband and their three cats (Iphy, Squeak-a-Doodle, and Todd Baryshnikov).

She loves to hear from readers, so find her on Facebook at @wendylynwatsonauthor.