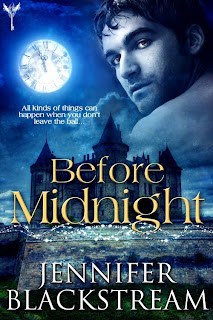 Loupe always dreamed of getting married. She yearned for a caring husband who would take her away from her servant-like existence at home with her stepmother and two stepsisters, a man who would love her forever. Those dreams ended the day she was bitten by a werewolf. Now she’s a mindless beast on the night of the full moon—a condition that forever prevents her from sharing a marriage bed. Not even the attentions of a handsome and endearingly strong prince can convince her that the life she wants is still possible.

Etienne is a prince in need of a werewolf. A werewolf himself from birth, Etienne and his family have protected their kingdom with tooth and claw—literally—for thousands of years. Unfortunately, the spell of a well-meaning witch is slowly turning him human. Only the bite of a cursed werewolf, one who was not born with the beast inside, can save him from becoming human. He has no time for anything that will not lead him to a cure for the cure. Not even the beautiful maiden whose gentle nature soothes his soul can take his mind from his goal.

Love cares little for the best laid plans or the impossible. A grand ball. The stroke of twelve. A magic “slipper.” All kinds of things can happen when you don’t leave the ball…Before Midnight.

All right, you’re not going to believe this, but here it is: I did not write the first Cinderella story. No, really, it’s true. Pick your jaw up off the floor. No, the story of Cinderella has been around for a very long time, and it has many variations. Let’s travel back in time to the 1st century BCE and take a look at one of the earliest version of the Cinderella tale. A tale of a woman named “Rhodopis.”

Tale: Rhodopis was a Greek girl captured from Thrace and sold into slavery in Egypt. Unbeknownst to her master, Charaxos, Rhodopis was often mocked and mistreated by the other servant girls. One day, Charaxos caught Rhodopis dancing by herself and found her movements so graceful that he gifted her with a pair of rose-gilded slippers. This perceived sign of favoritism only made her treatment at the hands of her fellow slaves all the worse.

One day, while washing clothes at the river, Rhodopis’s slippers got wet and she left them on the bank to dry. A falcon swooped down and snatched one up, flying to Memphis where it dropped the slipper into the lap of Pharaoh Ahmose II. The Pharaoh believed the falcon to be the god Horus, who had the falcon as his bird, and thought the slipper to be a sign. He immediately declared that he would wed the woman who fit the slipper. Eventually he made it to the home where Rhodopis was a servant and when she tried the shoe on, it not only fit, she was also able to provide its mate.

·    Some say that Rhodopis’ master favored her because of her physical appearance. Having been kidnapped from Thrace, Rhodopis was fair complexioned and had blonde hair and blue eyes, a dramatic difference from the darker tone of the Egyptian people.

·    Rhodopis may have been a hetaera (a highly educated and skilled woman who often had sex with her patrons, aka a courtesan). In this scenario, rather than being kidnapped and sold into slavery in Egypt, she was in fact brought to Egypt by her master. In this story, Charaxos encounters her as a hetaera and falls in love with her. He purchases her freedom for a great sum of money.

·    She was a slave in the same household as Aesop

·    The Pharaohs of Egypt at the time of Rhodopis did not have one wife. Rather, they acquired women to be courtesans in their household.

·    She was apparently first purchased by her Master, Charaxos, with a bag of gold dust.

Jennifer Blackstream is a psychology enthusiast with both a B.A. and M.A. in Psychology. Her fascination with the human mind is most appeased through the study of mythology and folklore as well as all of Terry Pratchett’s novels.

Jennifer enjoys listening to Alice Cooper, trying new recipes (to which she will add garlic whether it calls for it or not), watching television with her family, and playing with her woefully intelligent four year old son.

Jennifer spends most of her time drinking coffee from her X-Men mug and desperately trying to get all her ideas written down before her toddler can find that all magical button on her laptop to make all her work vanish.

1 eBook Copy of Before Midnight!

Leave a comment to enter and I will pick one of you randomly!

In Jennifer's guest post she shares the very first Cinderella story.
There are many different retellings, so please share you're favorite version of
Cinderella's story.
Posted by Christina @ Biblio Thoughts at 12:00 AM