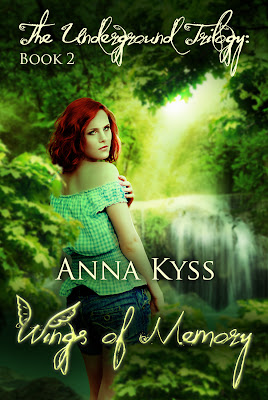 Kiernan leaves his homeland, hoping to unlock the secrets that could save his people from extinction. But the path to answers is fraught with danger. He never imagines what lay hidden in the Costa Rican rainforest.

Shortly after arriving, Kiernan encounters the human girl that he spent months yearning for. Kiernan must decide between his love for Meghan and his budding loyalty to his brother, Avery. He tries to place his brother first, until faced with an impossible decision.

Kiernan must tap into magic to save his people. The only problem: unleashing his magic involves breaking his vow to his brother. What if the only way to help Avery is to choose Meghan?

Wings of Memory is a young adult, urban fantasy that weaves together supernatural lore, romance, magic, and an interesting take on Mesoamerican history. It is the second novel in The Underground Trilogy.
Posted by Christina @ Biblio Thoughts at 12:01 AM