The authors of the NAturals are hosting an event with giveaways AND have written a juicy story just for you! To kick things off we have the beginning of the story below. The remaining story will unfold over the next several days on the NAturals site. Don’t forget to check back to their site each day for a new installment and other surprises! 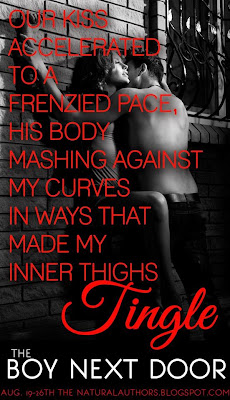 The Boy Next Door
by the NAturals

When your Friday afternoon plans involve being crammed in a half-squat between hanging shirts and pants while stark-freaking-naked, it’s time to reevaluate your life. And I was going to do just that as soon as Derek rescued me from the closet.  It had occurred to me before that dating a guy who still lived at home was going to be a problem, but it was hard to be choosy when nearly every guy my age had already taken off to college.  I was on the delayed-start plan myself, trying to save up enough money by working temporary and part-time jobs to go away next year.  That’s how I’d met Derek and wound up naked in his closet.  I had a knack for situations like this.

“Make sure you water the rhododendrons every afternoon or they’ll die, and do it today, please.”  His mother had been listing all the chores she needed done when she left on her Alaskan cruise in the morning.  So far she’d been here for what felt to be an hour.  I didn’t actually have a watch.  Hello, naked.  But I had a cramp in my thigh that was getting worse by the minute, and it felt like I’d achieved a level sixty in discomfort.

“And no overnight visitors,” she finished.

“Especially not that Natalie girl.  I don’t think she’s a good influence.”

To continue the story and for even more chances to win great prizes, visit us at our blog: The NAturals!
Event is August 19th-26th