Book Spotlight: In His Eyes Anthology (Stories from a Cute Guy) 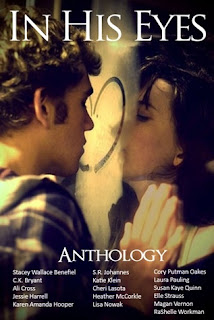 Available NOW, just in time for Valentines Day, The Indelibles bring you a one-of-a-kind young adult anthology! Sixteen original short stories, all from the point of view of our favorite male characters - some are old flames from our novels and some were dreamed up especially for this anthology.


Let these imminently crushable, swoon-worthy guys show you what romance looks like – in his eyes.
The contributors to IN HIS EYES include award winners, frequent “Top 100” placers, and hot 2011 debut authors.

Surprise, Surprise by Stacey Wallace Benefiel, author of Glimpse: Half the women in Melody's family can see the future, which makes it nearly impossible for Raleigh to surprise her. What's a guy to do for Valentine's Day when his girlfriend is always one step ahead of him?

First Kiss or First Kill? by C.K. Bryant, author of Bound: Love isn't always rainbows and kittens, sometimes it can be downright deadly. (A deleted chapter from Bound.)

Shattered by Ali Cross, author of Become: James and Desi use each other in an effort to cling to the darkness in each of them, but in the end they discover that love changes you. (A chapter of Become from James’ POV.)

Before by Jessie Harrell, author of Destined: When a younger Eros is exiled to a land that doesn't believe in the Greek gods, he finds the first love of his immortal life. Read Eros' first person account of his romance, and heartbreak, in the time before he met Psyche.

Unspeakable by S.R. Johannes, author of Untraceable: When Mo sees a strange girl in the woods, he follows her. He soon realizes they are both in a dangerous position and might not get out alive.

In the Beginning by Katie Klein, author of Cross My Heart: Seth is falling hard for Genesis Green, but the guardian angel is determined not to interfere, until an accident changes the course of their lives forever. (A short prequel to The Guardian.)

A Chance Encounter by Cheri Lasota, author of Artemis Rising: Finnian's eyes hide a terrible secret. But a girl on the train home, the girl in tears with a secret of her own...She sees right through him. A scene from the upcoming novel, Echoes in the Glass.

Family Bonds by Heather McCorkle, author of The Secret of Spruce Knoll: A Halloween party filled with teens who can channel energy and use it to kill, what could go wrong? For Spruce Knoll fans who are dying to read more about Fane.

Getting Closer by Lisa Nowak, author of Running Wide Open: Megan is smart, hot, and an upperclassman—in other words, way out of Cody’s league. So why did she choose him? (An excerpt of Getting Sideways.)

Precalculus by Cory Putman Oakes, author of The Veil: a re-telling of the fateful class period that changed Addison Russell’s life, from Luc’s point of view (a.k.a. Chapter 2 of The Veil from Luc’s perspective)

The Almost Assassin by Laura Pauling, author of A Spy Like Me, releasing Spring 2012: Malcolm tries his hand at the family business but his conscience and a beautiful "spy" may be his downfall.

Mind Games by Susan Kaye Quinn, author of Open Minds: Raf wants to take Kira—the only girl in school who doesn’t read minds—to the mindware Games, but his friends have other plans. (A short prequel to Open Minds.)

By The Firelight by Elle Strauss, author of Clockwise: When Nate McKenzie asks an unpopular girl to dance on a dare, he's in for the time of his life.

A Very Alien Valentine’s Day by Magan Vernon, author of How To Date An Alien: After surviving confinement and an intergalactic war for his human half, Alex, now he has to live through the biggest challenge of them all: Valentine's Day.

Aligned by RaShelle Workman, author of Exiled: A half-Eternal boy and an Eternal girl must free millions of tortured souls from a creature whose been feasting on their pain and suffering.
The contributors to IN HIS EYES include award winners, frequent “Top 100” placers, and hot 2011 debut authors.

Here's a PEEK inside Mind Games:

Every time I see her, she surprises me.

Not in a charming or tantalizing way, although there’s no question she captivates me. She surprises me because there’s no whisper warning of her presence like with everyone else in Warren Township High, where the dull roar of thoughts from the throng of students in the hallway practically drowns out my own. Sometimes she’ll appear by my side without warning. Or like today, I catch a glimpse of her retreating down the hall. But I never hear her thoughts first. Even if she and I were the only two people in the entire school, I still wouldn’t be able to read her mind. And she can’t read mine either.

And that’s exactly the problem.
Posted by Christina @ Biblio Thoughts at 12:57 PM