Review: Shadow of the Vampire by Meagan Hatfield 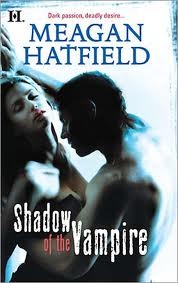 Tagline(s): Dark passion, deadly desire... / Even vampires should never sleep with the enemy.

Summary: Vampire princess Alexia Feodorovna has been undead for 125 years, so it's been a while since any man has made her pulse race. Until Declan Black. One look at his bronzed body and a fire like no other consumes her. Then she discovers that he's a dragon lord come to take revenge on the vamps who killed his parents. And claim a crystal said to imbue it's owner with incredible powers.

Alexia is ordered to torture and kill the dragon lord. Yet with each reckless encounter, she finds herself consumed by his fiery passion. A passion Declan battles, as well. Will he be able to resist the fire of lust she kindles within him and keep revenge in his heart? Or will he risk everything to quench the burning desire and claim the vampire as his own?

Meagan Hatfield has created a unique world secluded from humans where vampires and dragon shape-shifters are at war in Shadow of the Vampire.

Alexia is the princess and soon-to-be queen of the vampire horde currently at war with the dragon flock. She cares deeply for her people and everything she does is with them in mind. But she and her people are oppressed by the power-hungry soldier, Lotharus. Alexia really fears Lotharus after he forced her to submit to him and raped her. Now she's become passive and scared to stand up to him. But when Alexia meets Declan, the new dragon lord, her makes her feel strong, cared for, and truly wanted.

Declan became the King of his flock when the vampires murdered his parents. Seeking revenge and a crystal that could save or destroy them, Declan and his sister Tallon infiltrated the Horde's catacombs. To protect Tallon and the crystal, Declan orders her to leave with the crystal and is captured as a result. Imprisoned and tortured by the malicious Lotharus, Alexia provides a nice reprieve, and as he gets to know and care about her, he will do anything to protect her.

Both Alexia and Declan are rulers of great integrity and honor. Their respective peoples are their top priorities. Even when it comes to their personal wants they think about how it could impact their people. Although when it comes to one another, they will do practically anything for the other. Some may say that's selfish, but I think it's only selfish when it comes to something you want, not something you need. And Declan and Alexia literally need each other to function with any normality.

The world of Shadow of the Vampire is kind of shrouded in mystery. There's the vampire Horde that makes its home in the catacombs within the caves and caverns near the sea and below the earth. The dragon flock dwells in caves high in the mountains to avoid the human population. Despite the fact that the two clans are at war, they both favor caves as their dwelling places. The vampires are a matriarchal society ruled by a woman, whereas the dragons are ruled by a king and queen; the dragon lord and his mate. But we don't really know anything about the humans and their role in the world. It's almost like they don't exist. It's a mystical world where its inhabitants are at war; a war that may very well be misguided because of Lotharus's vicious influence.

I honestly didn't know if I'd like this book, but I ended up really enjoying it. I liked that the romance between Declan and Alexia wasn't instantaneous. It was allowed to grow with every one of Alexia's visits while Declan was imprisoned, and every time Declan came to Alexia's aide. The villain of the story, Lotharus, is especially cruel and vicious; delighting in murder, rape and torture. He's power-hungry and hates being ruled by women. He's one of the very worst of bad guys. And even though we don't know much about the world of the book, because it's a mystery it keeps you wondering. I'm really hoping that Shadow of the Vampire is the beginning of a new series. Though Meagan has two other books that are about other characters in this book, I'd really like to see where the story of Shadow of the Vampire can go. With the open ending and parts of the story not concluded, this book could easily be continued, possibly from Tallon's point of view.

Excerpt (from the first page preview):

Embarrassment flooded her face. She wriggled beneath his hold, and barely moved an inch. "Let me go."

The dragon propped himself up on an elbow. His electric blue eyes slid from hers, to the flesh her leather bodice failed to conceal.

Her jaw slackened. "Release me or--"

"Or what? Don't tell me you're frightened of me now?" His thumb began to draw lazy circles over the pounding pulse in her wrist.

"I'm not frightened of you," she said, the words coming out in a breathy sigh.

His wing coiled tighter, crushing her breasts against the warm barrel of steel he called a chest.

"Then why are you trembling?" He dipped his head below hers. "I can hear you heart hammering. Right here." A hot, open mouth covered the pulse beating beneath the skin.

"Hungry. And you look tasty."

Meagan Hatfield currently writes dark paranormal romances for HQN & Nocturne. When she's not hovered over her laptop (writing, not Tweeting of course) you can find Meagan shakin' it in Zumba class where she teaches seven classes a week.