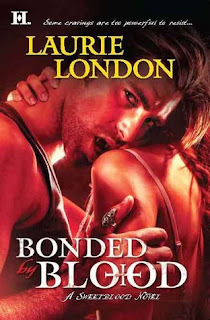 Tagline(s): Some cravings are too powerful to resist...

Summary: Deep within the forests of the Pacific Northwest, two vampire coalitions battle for supremacy--

Guardian enforcers who safeguard humanity and Darkbloods, rogues who kill like their ancient ancestors. Now Guardian team leader Dominic Serrano will be forced to choose between the vengeance he craves and the woman he can't live without...

Movie location scout Mackenzie Foster-Shaw has always known that she's cursed to die young. No one can protect her from the evil that has stalked her family for generations--vampires who crave her rare blood type. Until one afternoon in a wooded cemetery, she encounters an impossibly sexy stranger, a man she must trust with her life.

For Dominic, a man haunted by loss, Mackenzie satisfies a primal hunger that torments him--and the bond they share goes beyond heat, beyond love. She alone can supply the strength he needs to claim his revenge. But in doing so, he could destroy her....

Dominic Serrano is shot while infiltrating the Darkblood camp in search of information. Having escaped and dragged himself into the woods of a nearby cemetery he stumbles upon a beautiful blonde woman taking photographs of the old burial ground. Thinking that he could take a little blood to regain his strength, Dominic gains the woman's attention and as she comes closer he quickly realizes his mistake. It turns out that this woman has a rare blood and addictive blood type that's almost impossible for his kind to resist. Through sheer willpower Dominic is able to stop before killing the woman, but a bond like he's never felt before forms between them.

Mackenzie Foster-Shaw was looking for the perfect cemetery for a movie location and found it at the Bear Creek Pioneer Cemetery. That's not all she found when she was taking photos of the location. In the woods of the cemetery Mackenzie discovers the gorgeous and very injured Dominic. She approaches him to see how she can help and wakes up the next morning with a monster headache and no memory of the events of the day before. Along with her missing memory is a strange voice in her head and a connection to someone or something she can't understand or explain.

As Dominic and Mackenzie meet, get to know each other, and their bond deepens, both will have to make a choice. Can Dominic give up his revenge to save the woman he loves? And can Mackenzie let down her defenses and open her heart for a chance at forever?

Dominic is one of the Guardians of the Agency that protect humans from their Darkblood brethren. But he's also a man driven by revenge. His parents were murdered by Pavlos, the Darkblood Overlord, with his brother Alfonso's aide. Dominic's priorities change when he meets and bonds to Mackenzie. Mackenzie's blood gives Dominic strength and powers he didn't know he had. But with this new strength Dominic has to decide how he'll use it. Is his revenge worth Mackenzie's life?

Mackenzie is an amazingly talented artist and view the world with an artist's eye. But she's a haunted and hunted woman. Because of her family's rare blood type they have been hunted by the Darkbloods for generations. After her father and cousin go missing Mackenzie believes that she's next, and because everything seems hopeless she refuses to make any kind of long term commitment. But Dominic makes her want to believe in forever.

The Sweetblood world has two vampire coalitions warring against each other. The Guardians of the Agency are sworn to protect humanity from the Darkbloods. The Darkblood Alliance wants to go back to how things were when their ancestors ruled; killing indiscriminately. The vampires of this world aren't like your typical vampire. They can eat regular food, only need blood every once in a while, some can even go out in the sun. But they all, good and bad, have a weakness for Sange Dulce. Sweetblood is highly addictive and very rare. And the Darkbloods are in the business of harvesting and dealing Sweetblood to other vampires. For a price. They are like the vampire equivalent of the mob. And they are led by Pavlos, the Darkblood Overlord, and the man responsible for murdering Mackenzie's father and Dominic's parents.

I thought that the romance in Bonded by Blood was pretty strong, but other parts were kind of weak. All in all, I really enjoyed this unique world and the likable characters.

The next book, Embraced by Blood, is from Alfonso and Lily's point of view. It'll be great to learn more about Alfonso and why he made the choices he did. 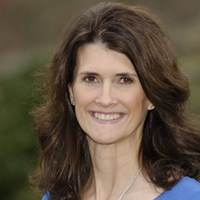 Laurie London is the author of the Sweetblood series, dark sexy paranormal romance from HQN Books. A graduate of Western Washington University with a BA in Business Administration and a former tester/programmer for a Fortune 500 company, Laurie now writes from her home near Seattle where she lives with her husband and two children.

When not writing, she can be found running, reading, or riding and showing her horse. Someday she hopes to qualify for the Quarter Horse World Show – that is, if her horse doesn’t get hurt again.