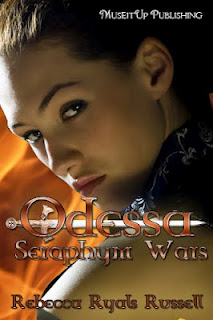 
Seventeen-year-old Myrna is drawn into the middle of an epic battle between Seraphym and Demons. An average High School student from Florida, she wakes one morning on the Steampunk planet of Dracwald, home of the demon-dragons responsible for her brother’s recent murder as well as many other atrocities in the news. She meets sweet and sensitive Michael, who explain...s that according to prophecy, Myrna must gather the remaining six Vigorios (teen warriors with special talents) then train with the Majikals on a protected island. He accompanies her on the quest, but harbours a secret past that ironically would destroy all the faith she has placed in him. A handsomely roguish Scientist with suspect motives haunts her dreams and makes sudden appearances in unlikely places, while a sensual dragon warrior defends her against her will.

Will love and lust, jealousy, greed, deceit and distrust break the delicate tie that binds these teen warriors called The Vigorios? Can a troupe of teens help the Seraphym finally defeat the massive empire of evil dominated for eons by the demon-dragons of Dracwald?

All you have to do to enter to win each week is sign up using the entry form on the left sidebar. Winners are chosen at random and posted on the site every Friday morning. Hence the name, "Free Book Friday!"
Posted by Christina @ Biblio Thoughts at 2:35 PM