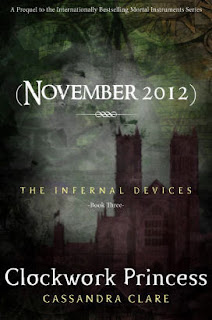 “And that is it?” Jem said. “That is the whole of it? The truth?”
He was sitting at his desk, one of his legs bent up on the chair beneath him; he looked very young. His violin was propped against the side of the chair. He had been playing it when Will had come in and, without preamble, announced that now was the end of pretense: Will had a confession to make, and he meant to make it now.

That had been the end of the music: Jem laying his violin down with a startled look and leaning back, tensed as if he were readying himself for whatever Will might throw at him.

“That is all of it,” said Will, who had been pacing back and forth as he spoke, and had only now paused to look at Jem. “And I do not blame you if you hate me. I could understand it.”
There was a long pause. Jem’s gaze was steady on his face, steady and silver in the wavering light of the fire.“I could never hate you, William.”

Will’s guts contracted as he saw another face, a pair of steady blue-gray eyes looking up at his. “I could never hate you Will, no matter how hard I tried,” she had said.

In that moment he was painfully aware that what he had told Jem was not “the whole of it.” There was more truth. There was his love for Tessa. But it was his burden to bear, not Jem’s. It was something that must be hidden for Jem to be happy. “I deserve it,” Will said, his voice cracking. “I put you in danger. I believed I was cursed that all who cared for me would die; I let myself care for you, and let you be a brother to me, risking the danger to you —”

“There was no danger.”

“But I believed there was. If I held a pistol to your head, James, and pulled the trigger, would it really matter if I did not know that there were no bullets in the chambers?”

Jem’s eyes widened, and then he laughed, a soft laugh. “Did you think I did not know you had a secret?” he said. “Did you think I walked into my friendship with you with my eyes shut? I did not know the nature of the burden you carried. But I knew there was a burden.” He stood up. “I knew you thought yourself poison to all those around you,” he added. “I knew you thought there to be some corruptive force about you that would break me. I meant to show you that I would not break. That love was not so fragile. Did I do that?”

Will shrugged once, helplessly. He had almost wished Jem would be angry with him. It would be easier. “You saved my life.”

A smile spread across Jem’s face, as brilliant as the sunrise breaking over the Thames. “That is all I ever wanted.”