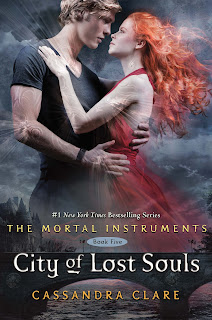 Jace set what he was holding down on the windowsill and reached out to her. She came to lean against him, and his hand slid up under her t-shirt and rested caressingly, possessively, on the small of her back. He bent to kiss her, gently at first, but the gentleness went quickly and soon she was pressed up against the glass of the window, his hands at the hem of her shirt — his shirt —

“Jace.” She moved a little bit away. “I’m pretty sure people down there in the street can see us.”

“We could …” He gestured toward the bed. “Move…over there.”

She grinned. “You said that like it took you a while to come up with the idea.”

When he spoke, his voice was muffled against her neck. “What can I say, you make my thought processes slow down. Now I know what it’s like to be a normal person.”

“How … is it?” The things he was doing with his hands under the t-shirt were distracting.

“Terrible. I’m already way behind on my quota of witty comments for the day. ”