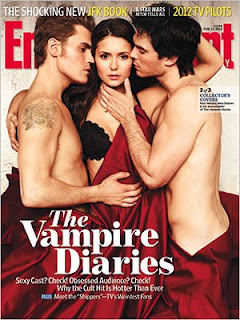 Somehow, for a series packed with vampires, werewolves, witches, hybrids (and yes, even the occasional ghost), it’s a love triangle between two undead brothers, Damon (Ian Somerhalder) and Stefan (Paul Wesley), and one very mortal girl, Elena (Nina Dobrev), that gets The Vampire Diaries fans the most riled up. (And judging from the chemistry in our cover photos, it’s not hard to see why. Check out collectors’ covers No. 2 and 3 after the jump.) 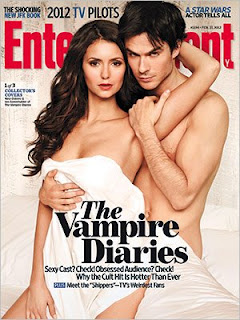 When executive producers Kevin Williamson and Julie Plec decided that they were finally ready for bad-boy Damon to share a legitimate kiss with Elena — after more than two years of buildup — they knew it would have to satisfy two avid fan bases: those who wanted to see Elena get with Damon, and those who were still holding out hope for her to work things out with soul mate, Stefan.

“It’s one of those things that you want to be able to defend,” Williamson explains to EW. “But even more importantly, you’d rather not defend it. You want it to feel real and right and natural by all the audience.” Satisfying the “shippers” (a term used to identify fans who root for fictional characters to have relationships), is a challenge both Williamson and Plec have faced each time they’ve tried to advance the triangle. Asks Plec: “How can we service this moment between our characters that we really want, a Damon and Elena kiss, without getting the Stefan-Elena side of the fandom to give up hope and give up on us? And vice versa, when we want Stefan and Elena to have a moment together, how can we do that and not have our Delena fans outraged?” 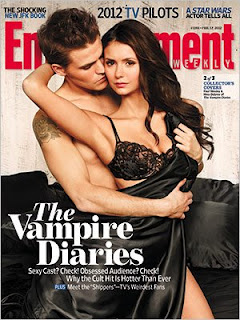 This week’s EW cover story also features interviews with Vampire‘s stars — Nina Dobrev, Ian Somerhalder, and Paul Wesley — who talk about keeping the love triangle red-hot, where they fall in the Stelena-Delena shipper wars, and all rumors swirling around their real-life relationships. Says Dobrev: “The rumor mills were ‘Is Nina with Ian or is Nina with Paul?’ There was a lot of speculation.” Notes Somerhalder coyly, “Nothing has been confirmed yet.”

The Vampire Diaries is just the latest in a long line of shows attracting a large shipper fan base. So who are these fans called shippers, and why do they do what they do? In this week’s issue, Jeff “Doc” Jensen explores these questions and offers a detailed history of the shipper phenomenon, from Star Trek and X-Files to today’s hit shows from Bones, Fringe, Castle, and Once Upon a Time – and explains how showrunners do and don’t factor in shipper input while plotting their characters’ fates.

Check out EW portraits of Paul Wesley, Nina Dobrev, and Ian Somerhalder, plus a couple of behind-the-scenes peeks at the photo shoot, and all three collector's covers! 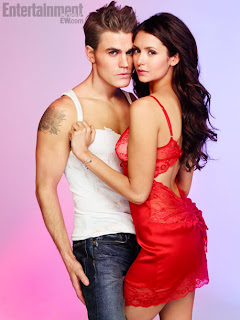