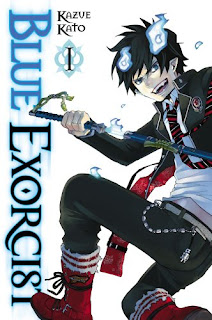 Summary: Raised by Father Fujimoto, a famous exorcist, Rin Okumura never knew his real father. One day a fateful argument with Father Fujimoto forces Rin to face a terrible truth--the blood of the demon lord Satan runs in Rin's veins! Rin swears to defeat Satan, but doing that means entering the mysterious True Cross Academy and becoming an exorcist himself. Can Rin fight demons and keep his infernal bloodline a secret? It won't be easy, especially when drawing his father's sword releases the demonic power within him!

A lot happens in Volume One (as with any manga)--Rin awakening to his demon power, meeting Satan, swearing to become an exorcist, attending True Cross Academy, fighting his first demons, reconciling Father Fujimoto's death with Yukio, and meeting Shiemi.

I liked Rin from the very first page, although I always seem to like the bad boy characters. This characters type always has a tough exterior, but a more sensitive interior. Rin comes off as hot-headed and brash, but he want to help people and become a respectable person. I loved how he declared to Mephisto, "I'm not a human or a demon. But I will be an exorcist!!" He doesn't want to be an exorcist for revenge, but to become stronger so that no one else dies to protect him again. He has nobility and honor you wouldn't expect from a demon.

In this first volume the supporting characters we meet are: Father Fujimoto, who raised Rin and Yukio; Yukio, Rin's younger twin brother; Mephisto Pheles, Father Fujimoto's friend and president of True Cross Academy; and Shiemi, the cute and shy girl that Rin develops a crush on (although she seems to only have eyes for Yukio!). As the series goes on we'll meet more characters from both sides: the exorcists and the demons; as well as Rin's exorcist cram school classmates.

Volume One mainly consists of Rin awakening to his powers and being introduced to the world of the exorcists. We see some of Rin and Yukio's past and their reasons for wanting to become exorcists. I thought this was a strong beginning to the Blue Exorcist series.

Kazue Katō (加藤和恵, Katō Kazue), born on July 20th, 1980 in the district of Shinjuku, in Tokyo, is a Japanese mangaka, author of shōnen manga. She is mainly known to be author of Blue Exorcist. She also created Robot to Usakichi ( ロボとうさ吉 ), for which she received the price Osamu Tezuka Award.
Posted by Christina @ Biblio Thoughts at 5:32 PM