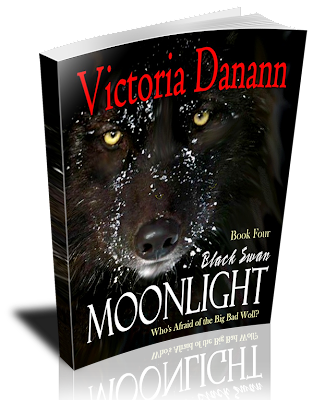 The fourth installment in The Order of the Black Swan serial saga. The story of B Team continues while the romance centers on Stalkson Grey, head of the Elk Mountain Reservation Tribe of werewolves. He embarks on an adventure he would never have dreamedpossible, willing to take any risk to save his pack from extinction. Along the way he learns thattrue love can find you in the strangest places, even when you're far, far from home.

"What do you know about my sister and that prancin' prick of a fairy prince?"

Elora blinked, but in the space of that flutter he learned all he needed to know. He had found out the first night Storm brought her to poker, back at Jefferson Unit, that her very expressive face telegraphed even the tiniest nuance or feeling or thought. By now he knew her so well that she was as transparent as air. She was caught off guard because she hadn't expected that question while Ram was cooking a leisurely Sunday breakfast.

"You just don't like him because he can stand toe to toe with you and not be cowed by the H.O.H. elfster."


Ram turned away from frying bacon and gave her a look. It probably didn't have the effect he intended. He was wearing jeans, a long sleeve black tee that stretched across his chest enticingly, and a black Jack Daniels apron tied around his waist. She thought perhaps nothing was sexier than watching Ram's muscles ripple while cooking her breakfast.


"Do no' try to deflect. 'Tis I. And Paddy knows I can tell when you're hidin' somethin'."


"Speaking of hiding. You're going to have to do something about all these guys overrunning our property. Our home - the one that was intended to be our very own, very private property. Please, Ram. Make them go away."


His expression softened a little as he decided to allow himself to be temporarily derailed.


"Sol, Simon, and every one of your friends agree that we can no' leave you and Helm vulnerable after the threat those alien buggers left hangin' in the air. That goes especially for your friend, Sir Storm."


"Aye. Your friend. The bloody wanker suggested that I'm no' responsible enough to be entrusted with lookin' out for you. Said, 'You're no' takin' good care of my namesake's mother. I'll be forced to give the job to someone else if you do no' shape up and begin takin' it seriously'."


Elora laughed. "He said that?"


"Aye. As if 'twas all my doin' that you ended up givin' birth alone in a freezin' wolf cave. With. No. Phone."


Ram narrowed his eyes at her. "Think very carefully about what you are about to say before you say it."


Elora smiled brightly. "I was going to say that no one in his right mind could fault you."


Ram nodded and resumed turning the bacon. "Exactly. I should have reminded him what happened when he was in charge of the Baka interview at Unit Drac. He pouted for hours after learnin' first hand that the Lady Laiken does as she fuck-well pleases."


Elora concurred by nodding vigorously. "It's a burden, but you bear it well, my love."


"All kiddin' aside. I do. I really do." He began setting strips of cooked bacon out to drain the grease.


"Well, Sir Storm is going to be plenty busy with his own burdens."


"No. They're expecting Publishers Clearing House to pay for their villa renovation."


Ram gave her a look. "You know, I'm thinkin' there's only enough of this lovely bacon for one and, since I cooked, I really should be keepin' it for myself."


"Yes! They're expecting a baby. Litha thinks it's a girl."


"A girl!" Ram practically whooped. "Paddy's Great Balls Afire. I can no' wait to see Storm try to be da to a girl." He laughed enjoying that idea and then grew serious. "As for the buggers who violated my grandda's forest, I'll no' be givin' 'em a second chance at my family."


"Rammel. I hear you and I understand you."


Elora smirked while she snagged a piece of bacon. "Have I ever mentioned you make great bacon?" She nuzzled his ear on the way back to her stool. "Almost as good as chocolate."


Ram pointed a spatula at her. "I swear to Paddy you have that thin'... that ADDD."


When his brows drew together she smiled because Helm looked at her with that same expression several times a day. They made him accidentally in a snow covered cottage, but he was made with love and now he was a little bit her and a little bit him. A miracle indeed.


"You can no' concentrate 'cause you've been smokin' dope?"


Ram stared at her for a few beats, finally shook his head and said, "No idea."


"You don't have an expression here about the pot calling the kettle black?"


"We do no' that I know of, but I think I begin to follow your point. You're tryin' to say that I should no' be accusin' you of short attention because mine is even shorter?"


Of their own accord, his eyes drifted down to the cleavage showing between the Henley buttons she'd left undone.


She did a little shimmy and he grinned sheepishly. "Guilty." He put an orange juice in front of her. "And be careful of the sexy dancin'. You'll be gettin' Helm's milk all over your clothes again."

Elora rolled her eyes. "He gets enough. Have you seen how chubby his little face is getting?"


"All I'm sayin' is that chubby cheeks do no' run on my side of the family." When she took a mock threatening step toward him, he laughed. "Just teasin' darlin' girl. Just teasin'. You know I would no' change a hair on your head. Or his."

"Okay. All I'm sayin' is that insanity doesn't run on my side of the family."

A look of horror slowly covered her face as she realized what she'd just said. She hadn't yet personally confronted what the assassin in the woods had said about the Laiwynn clan, but if it was true, it meant that cruelty and despotic behavior might run in her family.


Ram put his utensils down, wiped his hand on his apron, and offered himself for a hug.


She stepped into the comfort of his arms.


"What I was trying to tell you earlier is that I've never made any secret of the fact that I won't give up my freedom to live a restricted life, no matter how luxurious or comfortable. Not for anything."


"That's not fighting fair and you know it."


"When it comes to your safety - and our son's - you think I care about fightin' fair? 'Tis the very last of my concerns."


"Let me put it this way. You need to come up with a more agreeable Plan B and you need to do it while I'm still in a listening mood."


She looked down at her pretty Holland china plate, part of the set they got as a wedding present from Kay and Katrina. She had a picture of how good life was going to be there in their new home. Had the Raleng clan assassins spoiled her vision of the future to the point of ruin?


Was it time to confront that possibility?


"No." When she looked back up, Ram thought he might have seen her look just a little worn. Like her aura hadn't been buffed in a while. Sometimes he caught her looking off into space and he suspected that she was thinking about what she'd been told by the Raleng clan assassin, wondering if the massacre of her family was really a coup d'etat." Armed people guarding the house. Hardly what I pictured."


"I know." Ram sat down next to her and took her hand in his. "We'll figure it out. Monq's workin' on it." He pulled up like he had an idea. The change was so subtle that no one besides Elora would have even noticed it.


"He's workin' on detectin' interdimensional activity - identifyin' the source and location. He says 'tis a logical first step toward the defense system we're goin' to be needin'."


"Well..." She knew she was in trouble when he turned on that look that he had given her the first night they had met, the puppy dog plea that was so irresistible she could be manipulated out of her socks with full knowledge and complicity. She hated that. It was... manipulation by consent.


"'Twas just thinkin' that, for the time bein', just while we're sortin' this out, maybe we should move back into Jefferson Unit. You and Helm would be safe there. I know 'tis no' ideal,but there is the court park, food, and babysittin' on demand. 'Tis no' this." He looked around the room and gave a little sigh. He had put a lot of himself into renovating the property and somewhere along the way had come to understand why she loved it and pictured their little family living happily ever after there. "But we were happy at Jefferson too. We could even help Monq. Maybe speedin' thin's along a bit?"


"I truly hope no one is recordin' this conversation." Ram's mouth softened at the corners making him look so beautifully kissable that she had to lean in and remind herself if those kisses were as good as she remembered. He didn't seem to mind complying with her wish. When she pulled back, he said, "We could get Glen to keep an eye on that. The wolf pups I mean."


"This is not just some ruse that's going to get us sucked back into active duty?"


Ram cocked his head like he was having trouble with that question.

"Why would I go to so much trouble to keep you safe only so I could risk gettin' you killed?"


Elora stared at Ram for a few seconds. "I'm not the only knight in the room and we both know how persuasive Sol can be when he wants something. Before I even consider this proposal, I need some reassurance that none of us, not you, not me, not the baby - none of us - are going to end up on any field assignment. Not in any capacity."


"Okay you approve of my answer or okay we're packin' for Fort Dixon?"


"Fort Dixon, but that's all of us. Blackie too. And we need an apartment big enough for the four of us."


"Thank Paddy. I'm goin' to get a good night's sleep for a change."


She hadn't realized just how much stress the fear of assassination had caused Ram until she saw his facial muscles relax. Yeah. It was a good plan. A good choice, everything considered.


"And, let's outline what would have to happen to make it possible for us to come back here and proceed to live life the way it should be lived. By ourselves. Speaking of which, I'm also not giving up the pleasure of a weekend at the cottage - just us - forever."


She smiled at him lovingly and indulgently. "Of course not. You're my hero."