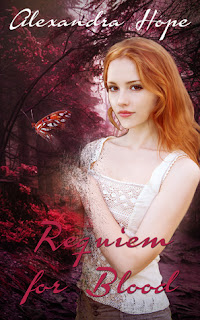 Summary: Seventeen year old Olivia Cohen has also had an appetite for blood and an aversion to the sun as a human and when she is killed by a mysterious young woman, she finds her appetite has heightened and her skin is now burned by the sun. Living her life in a colony with other people who live a "vampire-like" lifestyle, she has grown up hunting humans and believing there is a blood so powerful it will turn them from vampire-like into true vampires. On one of Olivia's final nights as a human she meets eighteen year old Troy Evans and is immediately drawn to the unique scent of his blood. Now as an actual vampire, she must learn how to suppress her need to hunt and kill for his sake and decide if his unique blood is worth saving from those who seek it.

Alexandra Hope was born in New York, raised in Atlanta and has lived in Germany for the past three years. She writes pretty much whatever she feels like and for her debut novel she chose ninja-like vampires. She's a (Linguistic) Anthropology major, language lover, vocalist in a Japanese band and part-time bad fanfic writer.