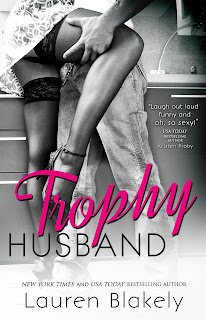 Sometimes you can't help falling in love, even when you try to do the opposite...Successful fashion blogger McKenna Bell has spent far too long protecting herself after the way her ex-fiancé left her at the altar for a college chick he met the night of his bachelor party. Loving again, trusting again, well, that's just not in the cards. Especially now that her ex is back in town with his new woman, demanding custody of McKenna's favorite creature in the whole world--her dog. No effing way. McKenna's had enough of him, and she decides to even the score by finding her own hot young thing -- a Trophy Husband. Sure, she's only twenty-seven, but doesn't that make it even more fun -- and infuriating to her ex -- to pursue a younger man? When she declares her intentions on her daily blog, her quest quickly skyrockets in popularity, and that's when Chris enters the picture, and he’s got all the assets. He's handsome, successful, and turns her inside out with a kiss to end all kisses, the kind that makes you feel like a shooting star. But loving again could mean losing again, and it's so much easier to focus on getting even, isn't it? Unless, you just can't help falling in love. Which means McKenna will have to come face to face with what she really wants in life -- protecting her heart from hurt, or letting go of her fears of a new beginning.

I could so fall in love with him. I could fall in love with him in a heartbeat. He brings his other hand to my waist, and pulls me in close. He’s seated on the bar stool, and I’m standing as I slide into the V between his legs, his firm thighs now on either side of me. The distance between us narrows, and the temperature rises. Like this, with him so close, I can tell how much he wants me. As much as I want him. I am turned on beyond belief, my skin is so hot, and my body is aching all over with the need to be touched, and he knows it. And just like that, the mood between us here at Circa Rose shifts. It’s no longer flirty, or chatty, or get to know you. We’re no longer a guy and girl confessing to crushes and likes. As he plays with the waistband of my skirt, his hand dipping inside, stroking the bare skin of my hips just above my panties, we are a man and a woman who want to get the hell out of here. The air between us electric, like the moments before a summer storm.

“We don’t need to shoot that promo anymore, do we?” he asks, and his voice is different now too. It’s smoky and low, and as he brings me in closer, I can tell he’s gone to the same place I’ve gone to. Desire. And then the hope that we can take this contact to another level.

“I was really hoping to see your fancy studio though,” I tease.

“That’s far,” I say, and I’m keenly aware of how my voice has become a ragged whisper. He has to know what I want right now. Him. His green eyes are dark, shadowed with lust and staring intensely into mine. He’s waiting for me to say more. “But I think I really want to see that couch.”

“Good, because I would really fucking love to make out with you properly right now.”