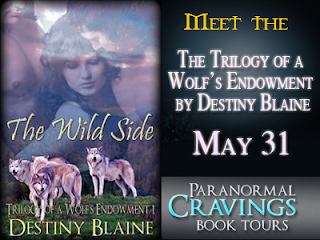 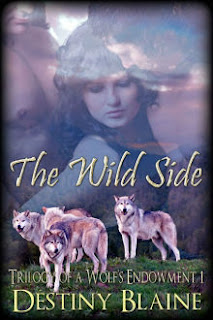 The wild side is an interesting stretch of territory where only the courageous survive.

Joe Kramer is a simple-minded young man tending farm with his father. When a neighbor needs a lift, his dad sends him out to give the woman a ride. Soon, a Moonlight Clan Council member has her claws in Joe, leaving him a changed man.

Accepting his fate, Joe joins a wolf pack steeped in history and tradition, but someone among them is threatening to tear their pack apart. To make matters worse, as the pack master, Joe rebukes the traditions of the past while ignoring the mandated placement of two mates.

As he leads his pack to a position of strength, Joe will stand out as the clear Alpha destined to protect the East Tennessee Moonlight Clan Council, but will his lack of experience and immaturity cost the clan what they cherish most? And who, if anyone, will stand beside him when he fights to protect those closest to home? 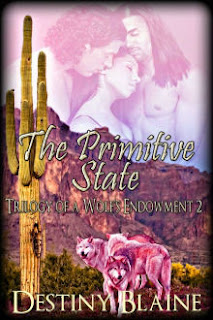 Shuke and Tommy are forced into captivity by a twisted hunter with knowledge of the Moonlight Clan Council. Desperate to separate the growing East Tennessee wolf pack, the shifter-hunter ships Shuke and Tommy to Arizona where a beautiful woman soon releases them.

Once freed, Shuke and Tommy decide to return to Tennessee, but there’s a slight problem with their plan. They can’t keep their hands off each other. Worse still, Shuke finds he can’t leave the Phoenix area due to an unexpected mate calling.

Following the scent of a woman, Shuke insists on returning to Salt River, the last place he saw the female who freed them. And with the lust growing between Shuke and Tommy not at all overshadowing his desire for a woman, Shuke sees his fate sealed as the trilogy of endowment calls to him in a way he never expected. 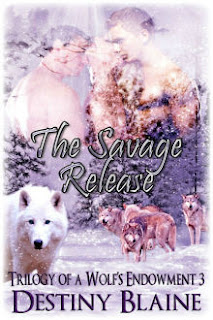 One beast may die, but another one will rise. And his savage ways will live on forever.

Two members of the Moonlight Clan Council are abducted. After they’re pulled away from their East Tennessee pack and shipped to Canada, they awaken only to find themselves surrounded by the snow-covered peaks of the Northern Rocky Mountains. To make matters worse, a formidable enemy stands before them and challenges them in a battle for their lives.

Fighting their way to freedom, Len and Ray come face to face with Sable, another wolf-shifter defending their pack’s enemy, Corey Marshall. Once Sable learns she supported the wrong wolf, she realizes how much she stands to lose.

Drawn to their attacker in a way that doesn’t make sense, Len and Ray see vivid images as the trilogy of endowment unfolds before them. They embrace their mating call, but the young woman is quite a handful. And Sable isn’t prepared for Len’s idea of a first mating. After Len and Ray unleash their building passion, Sable is left with only one choice—complete surrender. 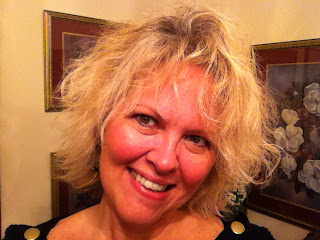 Destiny Blaine is an award-winning, bestselling e-book and paperback author. She writes under several pseudonyms in various genres.

When Destiny isn't writing, she enjoys spending time in Mississippi and South Carolina. She loves NFL and college football, college basketball, volleyball, poker, casino craps, and attending outdoor concerts. Her favorite pastime is sitting on the beach reading about intelligent ALPHA males who know how to take the lead in all situations.

Destiny lives in East Tennessee with her daughter and husband. Her son is serving in the United States Navy.