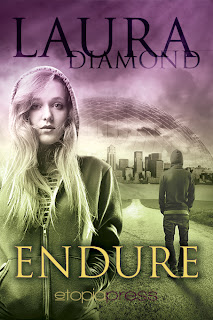 Endure (Book One of the Endure Series)
by Laura Diamond
Release Date: 07/12/13

Seventeen-year-old Justin's anemic blood is a blessing. Or a curse. It all depends on who you ask.

To most of the immortal Vie, his blood is a scourge: untouchable and useless. To some Vie, his blood is a drug. To Justin, it’s something that gets him in a lot of trouble. Being poisoned by a Vie is just one example. His sister getting kidnapped is another. Whether it’s being coerced by a deluded cult leader, or negotiating with Alex—an Vie scientist addicted to Anemie blood—Justin struggles to keep every mutated drop of blood he’s got.

His fight for survival gets more complicated when he meets Alex’s slave, Cara. Despite coming from different worlds, they’re both prisoners, at risk of being drained by a hungry Vie any moment. When she risks her own neck to help Justin find his sister, he's left with a terrifying choice.

Saving what's left of humanity.
Saving his sister. Saving the girl he loves.
Or sticking a stake in Alex’s chest.
Justin can't decide which option will get him killed first.

I hated afternoons the most. Soon after came darkness—the time when a raiding squad could literally snatch you out of bed and drain all the blood from your body. It was amazing that any Anemies survived with the extermination campaign ridding the world of us red blood cell-deficient freaks.

My gaze jumped to the pale, indifferent sky, then jittered to the uneven-edged, partially constructed biodome as I walked. Eventually, the damn thing would cover the entire city, including the river surrounding the island, and part of the ocean capping the south side. The project had been in the works since before I was born. Incredible.

I gently squeezed my sister’s hand to make sure she kept up. Sammie had a tendency to dawdle and considering we made up the last rung of the society ladder, giving in to distraction could get you hurt—or killed. 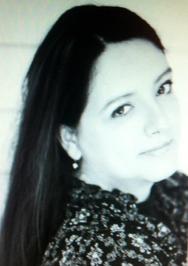 Laura Diamond is a board certified psychiatrist and author of all things young adult paranormal, dystopian, horror, and middle grade. Her short story, CITY OF LIGHTS AND STONE, is in the DAY OF DEMONS Anthology by Anachron Press (April 2012). Another short story, BEGGING DEATH, is coming soon in the CARNAGE: AFTER THE END Anthology by Sirens Call Publications. Her Young Adult Paranormal Romance novelette NEW PRIDE was published November 2012 and her novel SHIFTING PRIDE is coming December 7, 2012 from Etopia Press. When she's not writing, she is working at the hospital, blogging at Author Laura Diamond--Lucid Dreamer (http://lbdiamond.wordpress.com/), and renovating her 225+ year old fixer-upper mansion. She is also full-time staff member for her four cats and a Pembroke corgi named Katie.