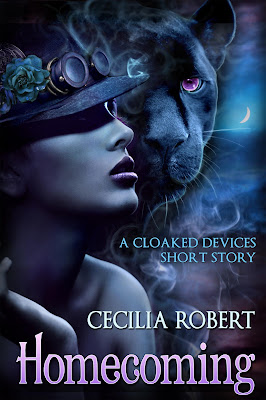 Five years ago, twenty-three-year-old panther shifter Sera Czedar left her home and her newly mated groom in a humiliating position after a mating ceremony gone wrong. She built a new life for herself in Varselles, the City of Outcasts where shifters exiled from their clans in the Seven Kingdoms can go for sanctuary.

Five years ago, panther shifter Levian Grayson was abandoned on the bonding bed by his bride, Sera. After years of tracking her, he arrives in Varselles, intent on staking his claim on her once and for all, even if it means hauling his slippery woman over his shoulder just to make sure that happens.

Sera has always known her homecoming would eventually catch up with her one day. The one thing she can’t bear to do is hurt Levian, which will happen as soon as he finds out the reason she left him. Is she ready to take that path? Most of all, will Levian still want her when the truth comes out?

Cecilia Robert lives in Vienna with her two children, has an incurable obsession with books, anything romantic, and medieval architecture. When not working in her full time job, catching up with her two children, writing or reading, she can be found, daydreaming about her next hero in a story who'll make her swoon with just a look (or a word). She loves to knit, crochet, and take photos of old buildings.