Release Day Blitz: Goldi and the Bear by Jessica Aspen‏ 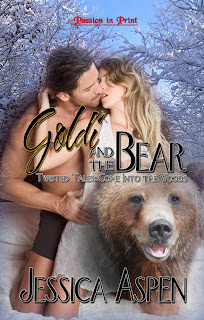 Goldi and the Bear
Twisted Tales: Come Into the Woods Series #3
Jessica Aspen

Goldi Lycan’s father has gone wild wolf. Goldi is desperate because without his help the bank is threatening to foreclose on the family ranch. Even worse, she suspects the secret buyer is her ex-boyfriend, Zeke, whose heart she crushed in high school.

Zeke has a secret. He’s never stopped loving Goldi, or forgotten their steamy nights together, and he’s determined to make her pay. When Goldi is injured in a Rocky Mountain blizzard she’s forced to take shelter in Zeke’s empty house. But look out! When Zeke arrives home to find a naked she-wolf in his bed, all hell will break loose.

The engine gave off a few guttural growls, coughed, and died.

“Noooo!” she wailed, and with the truck’s last rolling effort she guided it to the side of the road and into the high grass. She checked the mileage. One hundred and fifty-two miles. Nowhere near the two hundred and twenty mile mark that she needed to get gas. With the old truck’s speedometer broken as long as she could remember, they’d always re-set the odometer so they could get gas before they reached the two hundred mark. The twenty was just in case.

There should be an extra sixty-eight miles left before she ran out of gas.

She turned the car over and over, the grinding sound of the starter wearing on her nerves. No gas. And no one in sight on this lonely road that led nowhere but bear territory and Lycan Ranch. No one would be coming, and she only had half-an-hour to make it to town. On her own two feet. Or four.

She hopped out of the car and, for a fleeting moment, considered stripping off her clothes, tying them to her back, and running in wolf-form all the way to town. But, before she could put it into practice, she heard a motor. Someone was coming from the direction of Rover’s Corner. She turned. And as the expensive, shiny black pickup approached, dust blowing from its rear wheels, her lungs tightened and her heart sank.

Only one person in this area drove a new, black pickup.

The truck rolled to a stop next to the old, stalled truck, and the automatic window rolled down. Zeke Beresford leaned across the seat and asked, “Heading into town? Need a lift?”

At the sound of his voice, her heart skittered.

It had been over five-and-a-half years since she’d heard Zeke Beresford speak, and he sounded just the same. Sexy. Hot. Tempting. But he looked different. Way different. He still had thick, dark brown, straight hair, and deep, rich, chocolate brown eyes, but everything else had changed.

She couldn’t even get enough air to speak.

“I won’t bite.” His words were soft, almost flirty. But he wasn’t smiling. His face was hard, his eyes cold and assessing as he checked out her conservative clothes. And by the small shake of his head and sardonic lift to his brow, he found her wanting.

She looked up the road at the long, dusty walk to town and knew she had no choice. She had to take him up on his offer.

He started to pull his head back into the pick-up.

“No, wait.” She got the words out, grabbed her purse off the front seat, and slammed the creaky door of the betraying old truck. “I would love a lift into town.” Opening the door of the too tall truck, she raised her heeled foot up high, tugged her skirt down, and hauled her ass into the cab. “Thank you,” she said, with all the sophistication and air she could muster as she stared into the dark, dangerous brown eyes of her ex-boyfriend.

The one she’d stopped talking to when her mother had died and she’d dropped out of her junior year of high school. The one who had begged and pleaded with her to re-consider and whom she’d told she never wanted to speak to again.

Goldi huddled on her side of the luxurious cab, working on breathing past the tight squeeze of her heart, as they drove to town. Zeke’s capable, large hands expertly handled the powerful truck and she caught herself staring at them, remembering the way they’d felt on her skin. How, a full year older, he’d taught her inexperienced high school self all the things her parents never wanted to know she’d learned. Especially at the hands of a bear.

Old desires, long forgotten, tingled along her skin. She yanked her gaze from Zeke’s hands.

“Why didn’t your date pick you up at the ranch? Afraid Daddy dear might see?” Zeke’s mocking tone raised her ruff.

She darted a look at his hard face as he stared straight down the road. No one except Ned knew how close her father was to permanently turning wild wolf, and she wasn’t about to tell Zeke. Not now. Not with that callous tone in his voice telling her he’d never forgive her for dumping him.

He darted a look at her as they rounded the curve heading down the valley and into town. “Why are you all dressed up if it’s not a date? I don’t remember you being the kind to wear a skirt to grocery shop.”

“For your information, I have an appointment.” She didn’t want to tell him about her mission. But she was damned if she’d let him make fun of her. She felt uncomfortable enough as it was in the skirt and heels, and now being in his car was the icing on the cherry.

“Oh? What kind of an appointment?”

“A none-of-your-business kind.” That’s just what she needed, Zeke to know that she was begging the bank for time to pay off the mortgage. Her nerves pushed the tension from her tight chest into her throat. She swallowed past the lump.

“Well, you just let me know where you want to be dropped off.” Zeke eased the truck onto Main.

“Right here would be fine.” She pushed the words out past the straight jacket of her lungs, the lump in her throat, and her tightly clenched teeth.

“Here?” He pulled into an empty parking space and was out of the truck and around to her side before she could figure out which of the fancy buttons unlocked the door. He yanked the door open, and she was faced with Zeke Beresford at eye level. Anxiety clamped down on her chest and she couldn’t get any air.

“Let me help you,” he growled.

She had no choice.

She turned her knees to the side and slid out. He caught her and held her tight, pressed against his hard, muscular body. She gripped her purse in one hand, the other one landing on his shoulder as her breasts caught on his chest and he eased her down. Past his eyes, his lips, the dip of his throat, her pelvis and abdomen sliding down the thrust of his erection.

Her feet touched the pavement, but he didn’t let go. She gasped for air, drowning in the rich, spicy, familiar scent of Zeke and wished her traitor skin didn’t reveal everything she felt.

He didn’t move. His deep brown eyes held hers. Her chest fluttered with the unfamiliarity of being trapped.

Then he let go, and without the support of his strong arms she stumbled on the cement. Clutching her purse, she stood on shaky legs and mustered her voice. “Thanks for the ride.”

“No problem.” He backed up and bowed. “At your service, princess.”

Her already hot skin burned. She put her nose in the air and walked as fast as she could on her unfamiliar heels across the sidewalk and into the bank, putting Zeke and the past behind her. Right where he had to stay. 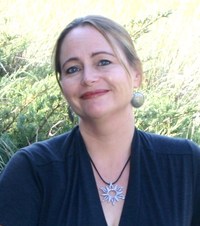 Jessica Aspen has always wanted to be spirited away to a world inhabited by elves, were-wolves and sexy men who walk on the dark side of the knife.

Luckily, she’s able to explore her fantasy side and delve into new worlds by writing paranormal romance. She loves indulging in dark chocolate, reading eclectic novels, and dreaming of ocean vacations, but instead spends most of her time, writing, walking the dog, and hiking in the Colorado Rockies.

To sign up for Jessica Aspen’s new release email please go to: http://eepurl.com/zs4Sj