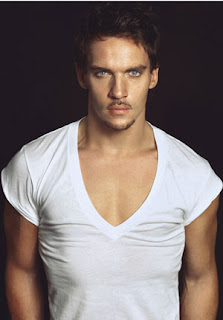 Jonathan Rhys Meyers is playing the part of Valentine Morgenstern in 'City of Bones'!

So this is not me posting news so much as confirming the rumors: YES, Jonathan Rhys-Meyers is going to play Valentine.

I’ve liked JRM since he was in Velvet Goldmine and I have to admit that image was what sprang immediately to mind when the producer called me and said “…Jonathan Rhys Meyers?”

And Robert, who is German and very practical, was like, “I hope you have seen things he is in since then or I will assume you do not go to the theater.”

So yes I should probably also mention that JRM plays Henry the 8th on The Tudors, and does a very good job of being charismatic, power-hungry, and cold.

Also a man who appreciates his weaponry.

Did Henry the Eighth own unbuttoned white shirts? And unlaced pants? Either way I suppose we now see why Valentine got so many people to follow his crazy schemes. I suspect by the end of the movie everyone will be going “Just do what that good-looking guy tells you to do, you crazy kids!”

I should probably also mention that he was great in Match Point and Bend it Like Beckham and lots of my other favorite movies. So, in sum: Ireland, we have cleaned you out of   your hot men. Sorry about that. You can have them back in three months when they’re done filming. In the meantime, Sarah Rees Brennan has offered to go onset and paint shamrocks on all the trailers.

[Also I apologize for my absenteeism these past few days. I hate it when there are rumors and I can’t confirm them so I decided to pretend to be dead until I got the confirmation letter news, which was very good for Clockwork Princess, on which I got a lot of revision work done, if not necessarily for my sanity.]

And because I still love Velvet Goldmine (watch it if you haven’t).


The Cast So Far: